My weekend did not go as planned, but I am deeply grateful it turned out the way it did, for it could have turned out much worse.

Last Friday, my family and I packed the car up after lunch and left around 4:00 pm for Santa Barbara, one of our favorite weekend getaways from Los Angeles. While cutting over to the coast on CA-126 around 4:45 pm, we suddenly heard a loud pop and a tire pressure alert advising me to pull over immediately.

The road was very busy, but I instantly turned on my emergency lights and thankfully was able to navigate over to the side of the road. We found ourselves on a narrow emergency lane on a stretch of the highway between Santa Paula and Fillmore with cars whizzing by us. My right rear tire was flat. I weighed whether to contact AAA or Tesla Roadside Assistance, opting to contact Tesla because we were now more than 50 miles from home. Via text message, I dispatched a tow truck to us, which would tow us into the closest Tesla Service Center in Camarillo for servicing.

We ended up sitting for nearly two hours on the side of the road before the tow truck showed up (should have called AAA…oh well…). By then it was almost 7:00 pm and we were warned that Tesla was closed so I would have to leave the car overnight. I called Hyatt and postponed our night at the Mar Monte, then booked us a room at the Hyatt Regency Westlake, which was about 15 minutes away from the Tesla Service Center. I figured we would drop our car off and take an Uber to the property.

Now let me just state here how well my children handled this delay. Try asking a six-year-old and two-year-old to sit still in a car that is not moving for two hours. Miraculously (because my kids are not exactly saintly), they held up very well. We passed the time by listening to German children’s books (that was a bit tedious…).

The tow truck finally showed up (the driver reeked of pot and blamed an “accident” on CA-118 for his delay which I admittedly scoffed at, but it turned out we passed it on our way to the service center) and we departed for Camarillo, about 30 minutes away. We reached Tesla and a man came out of the garage.

“Hi there. Listen, we’re working late tonight. You just sit tight in the lounge and we’ll have your car done in 15 minutes.” 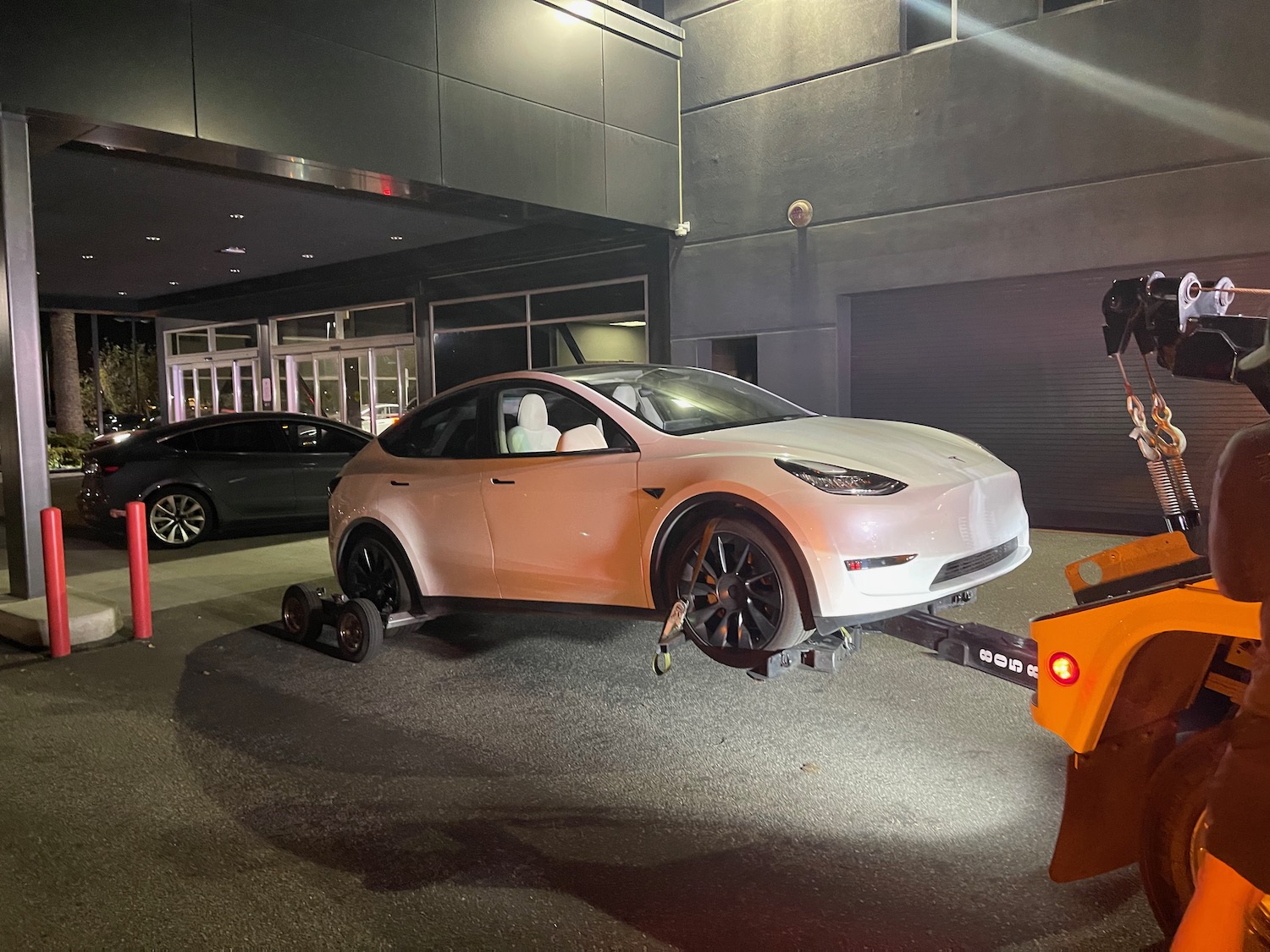 20 minutes later, with a new tire installed, we were on our way to Westlake Village. It was now 9:00 pm and we had not even eaten yet. We noticed there was a Sprouts grocery store a block away from our hotel and stopped there first, picking up whatever was left at that late hour for our in-room picnic. We checked into the hotel, were upgraded to a “California Suite” and were soon indulging in sandwiches and salad and yes, even some candy and chips. No, it was not Santa Barbara, but we still had a great time together. Here’s the thing: this was a serious blowout, which could have caused serious damage to the car or far more importantly, to my family. I am so thankful that no one was hurt.

While we didn’t make it to Santa Barbara, we still had a lovely weekend together at a new hotel (review coming). It’s not fun to spend money and time you did not budget for on a car repair, but what a blessing it was that there was no damage and that we could chart a very happy memory, even though it was in a very different venue than originally planned.