We had a fairly turbulent journey from Las Palmas to Madrid onboard an Iberia Express A321 in business class, with good service but a disappointing breakfast.

Our return to the United States after a week on Gran Canaria was complicated by a flight cancellation from British Airways. Our original itinerary was to fly from Las Palmas (LPA) to London (LHR), overnight near Heathrow then fly from London to Los Angeles (LAX). That way, we’d have two late afternoon flights which typically make sleeping easier for the kids.

But when BA cancelled our LPA-LHR flight, it left us forced to book LPA to Madrid (MAD) with an overnight in MAD before connecting to LAX nonstop in the morning or a double connection in both MAD and LHR so we could get home same-day. We chose the latter option, which meant a departure at 6:50AM…lovely.

After dropping off our rental car, we proceeded upstairs to check-in. An agent checked our COVID-19 tests and we soon had boarding passes as far as London. The agent did not speak English (or did not indicate she could), but we got by using my poor Spanish. 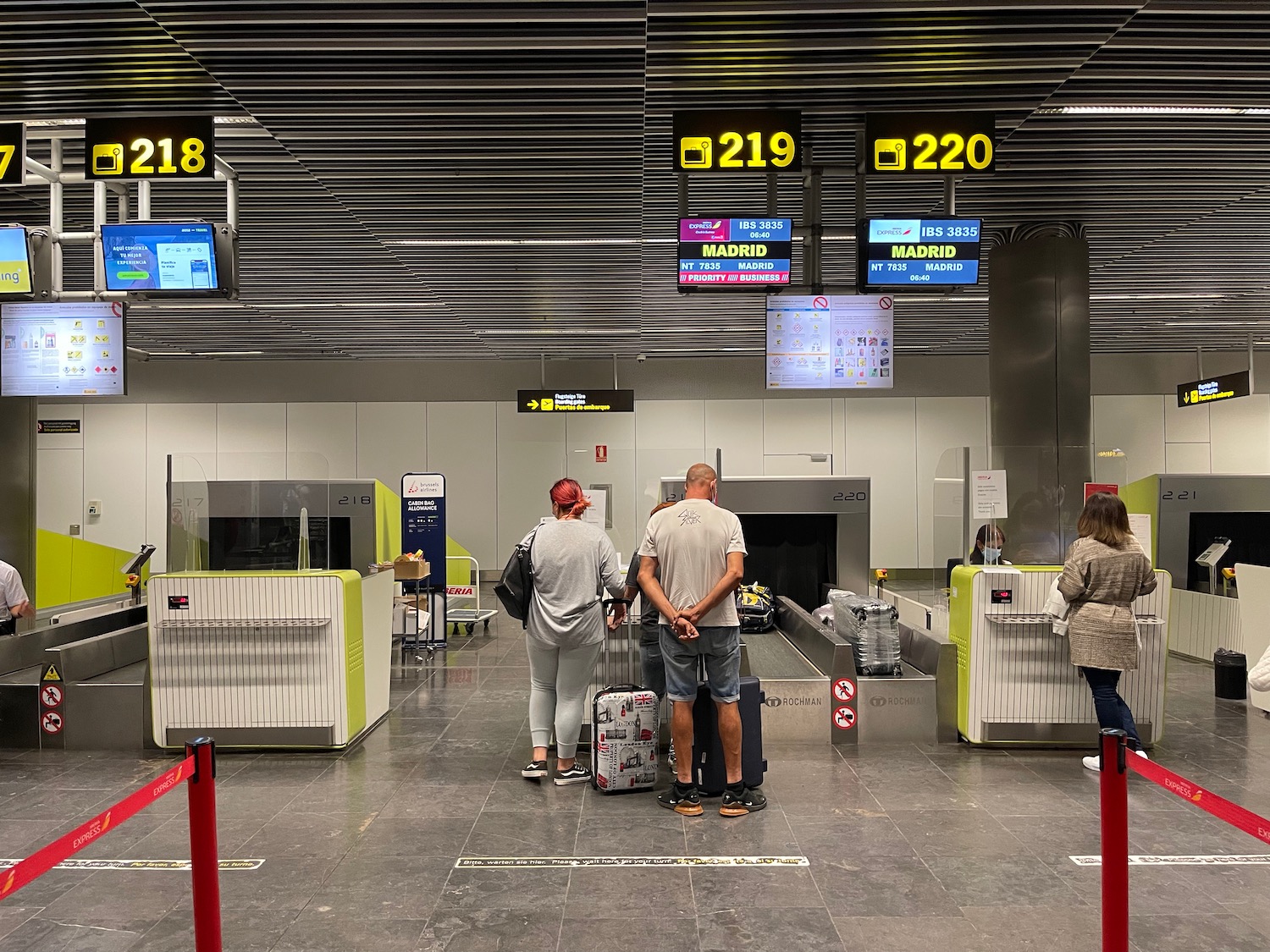 We arrived into LPA with no bags since we were flying on EasyJet, but checked two bags on the way out (we could have checked up to 10 bags…).

Iberia uses the Sala Galdós VIP Lounge in LPA, but it was closed due to the pandemic (it has since re-opened). Considering it was before 6:00AM, almost everything was closed, though there was a Starbucks open with a huge line (I skipped it, of course…my wife did brave the line for a mediocre cup of coffee).

Side note: while looking at the departure board, a sign noting a prohibition against photography popped up. Are they serious? Um, no. Just no. It was particularly ironic, that the sign before it indicated this area was under CCTV surveillance.

Boarding was chaotic, despite the early hour, but we were welcomed onboard first because of my oneworld emerald status, business class seating, and because we were traveling with my one-year-old daughter. Only there was pushing and shoving by some miscreants who decided they needed to be onboard first.

Flight attendants were huddled around in the front galley and ignored us upon boarding, but were very pleasant during the flight. It was 6:00AM after all…

This flight had four rows of business class, which were simply economy class seats with the middle seat blocked. We chose row one because it provided extra legroom and we could have the entire row to ourselves (our daughter was a lap infant and did not have her own seat). 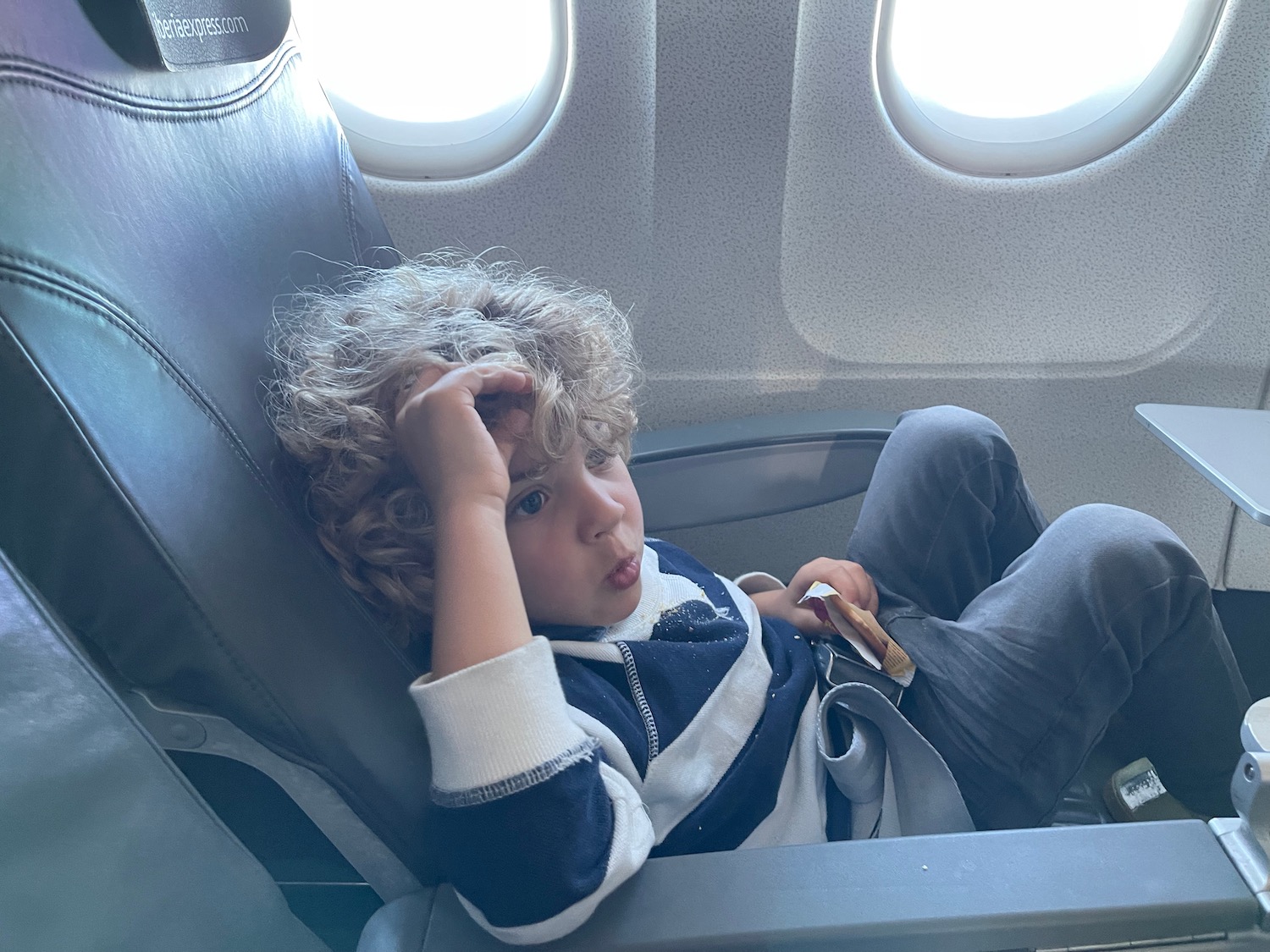 Seat pitch is 31 inches, which is tight but slightly more generous than behind the curtain. Because business class is variable (the curtain can be moved forward or back depending upon the demand for business class), if you are flying in economy class try to choose a seat as close to the front as possible, as you increase your chance for more legroom if the business class cabin on your flight is particularly small.

There were no power ports.

The plane had not aged all that well, with wear and tear showing near the passenger service unit. I was expecting (and quite looking forward to) a hot breakfast after takeoff. The flight was over 2.5 hours and I always enjoy the food in Iberia business class.

But a cold tray of Jamón ibérico (Iberian pork) was offered for breakfast along with yogurt and a packaged croissant. I figured this was probably due to Las Palmas being an outstation so this was catered on the inbound from Madrid the evening before. Still, when you feel like eggs and a hot croissant and get this, you cannot help but to be disappointed.

Still hungry, I ate the pork, which was of good quality. I also had some water and coffee and my son had orange juice. My wife and daughter, sitting across the aisle from us, were fast asleep and slept through the first half of the flight before the turbulence hit. 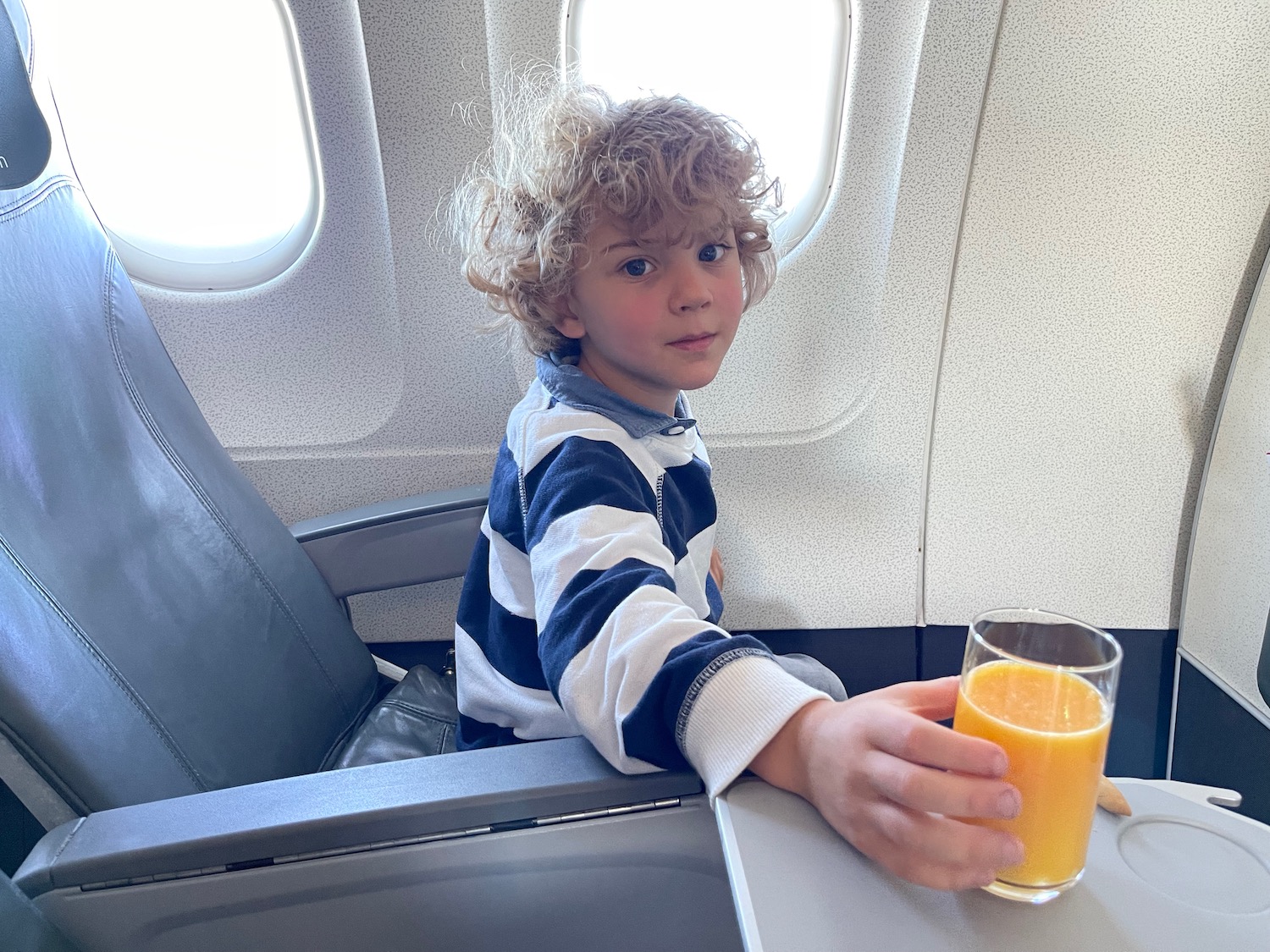 The flight got very turbulent during the second half, so much so that flight attendants were asked to be seated and the carts were rattling so much I was afraid one might pop out. I’m not sure if that is a regular occurrence on the route, though my outbound flight was smooth.

Free onboard entertainment is offered via a streaming intranet system. A selection of movies and as well as a moving flight map was available. 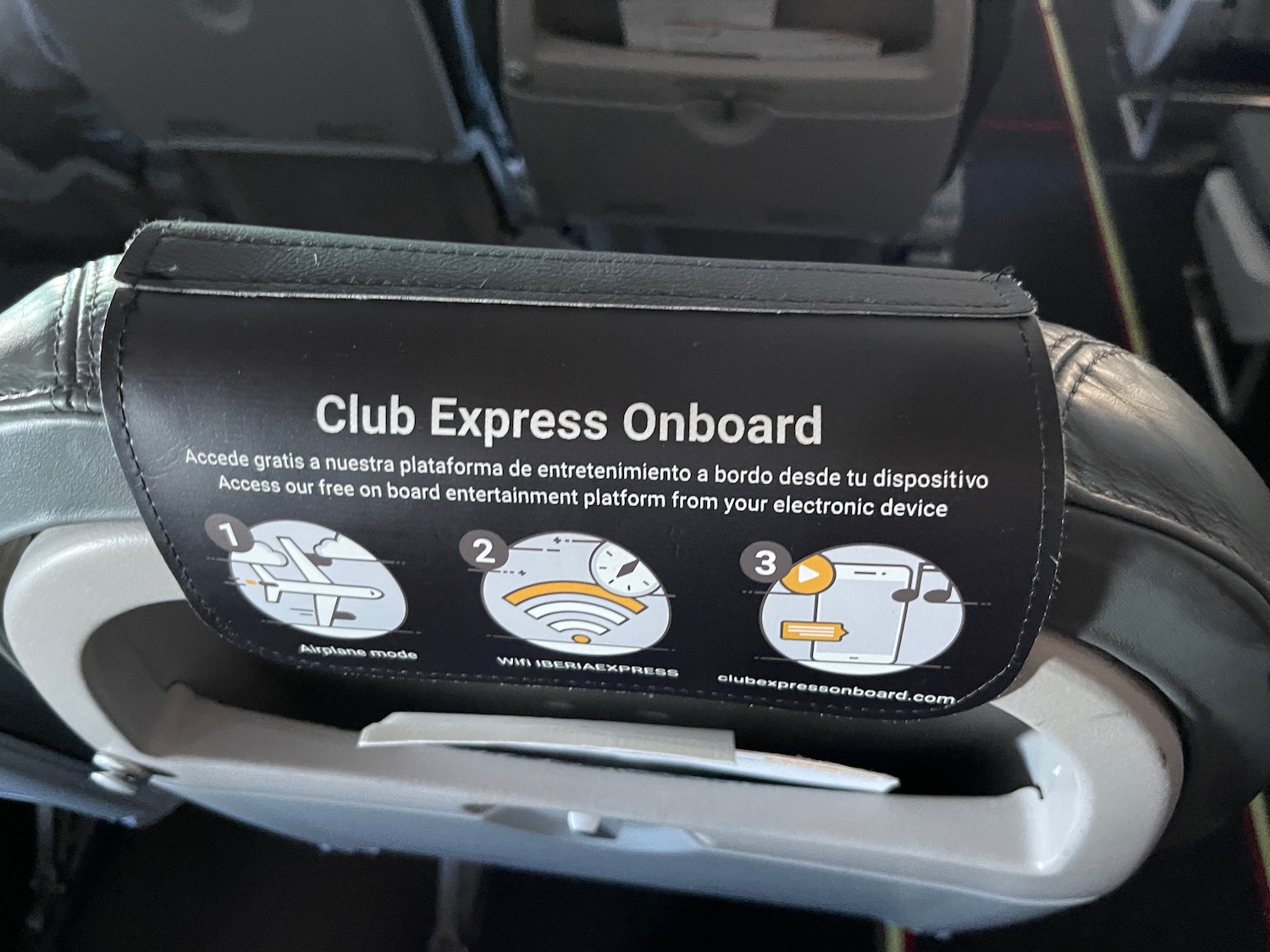 I’m not sure why Iberia went to the trouble of installing this system and not provisioning internet, but all my work was done for the day and I did not need to open up my laptop.

I took Augustine up to the lavatory to wash his hands…it was a standard A321 lavatory with no extra amenities. As we landed in Madrid, I saw an army of British Airways A380s parked on the sidelines. Thankfully, those have returned to the skies. 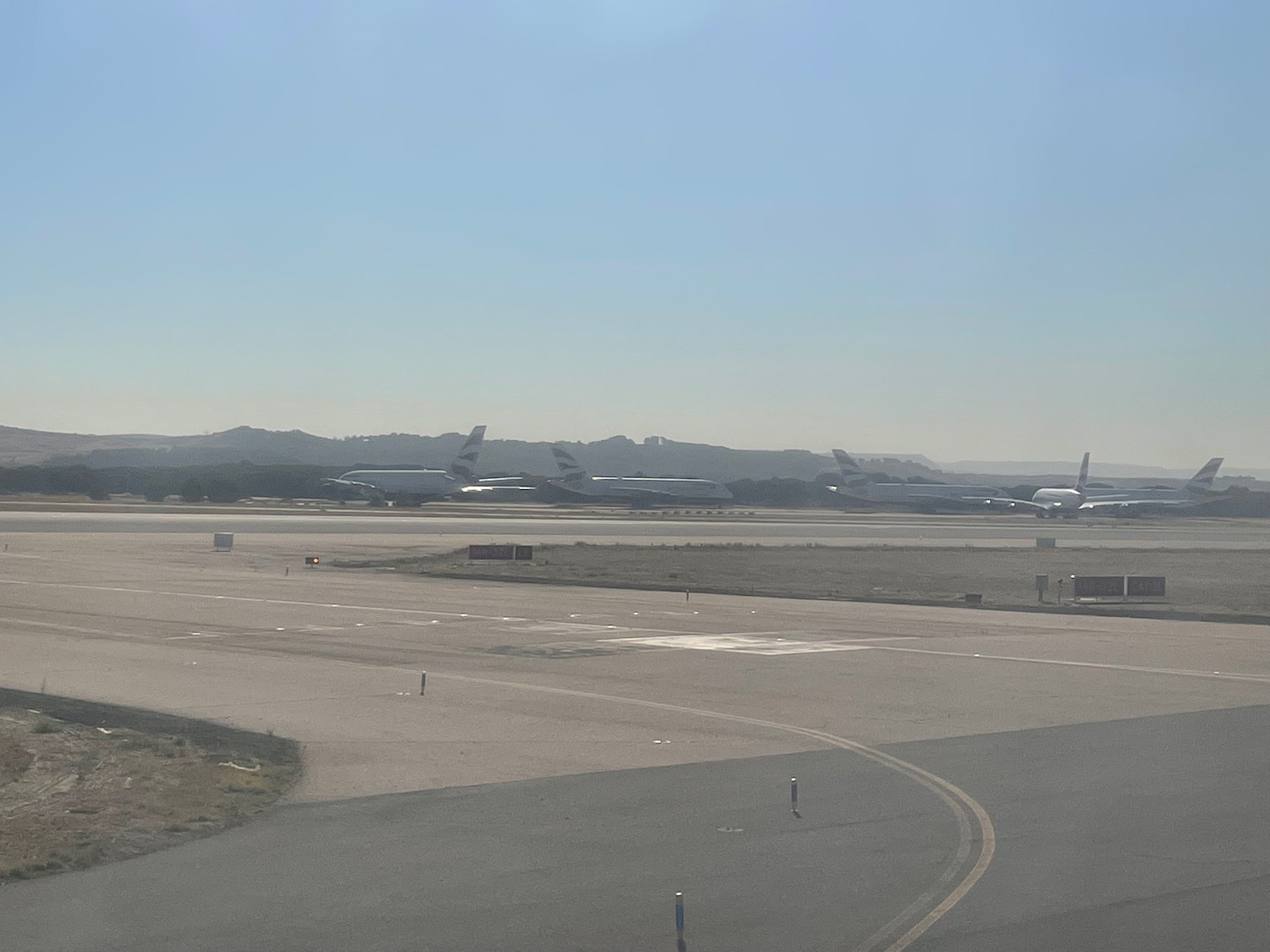 It was a very turbulent flight, which I don’t blame Iberia for, but I do blame Iberia for its poor catering on these early morning flights. Sure, it would cost money to set up catering contract in LPA, but a meager cold breakfast does not cut it on a fairly long intra-European flight.

Upon landing in Madrid we headed for the lounge ahead of our connection to London.