A long-time Award Expert client and friend recently returned home from Europe and had the great fortune of having the entire business class cabin to himself onboard a brand new SAS A350-900 in business class.

When we booked his ticket and assigned his seat, we noticed that there were only three other seats showing assigned in the entire 40-seat business class cabin. Turns out those were just blocked and no other passengers were onboard. 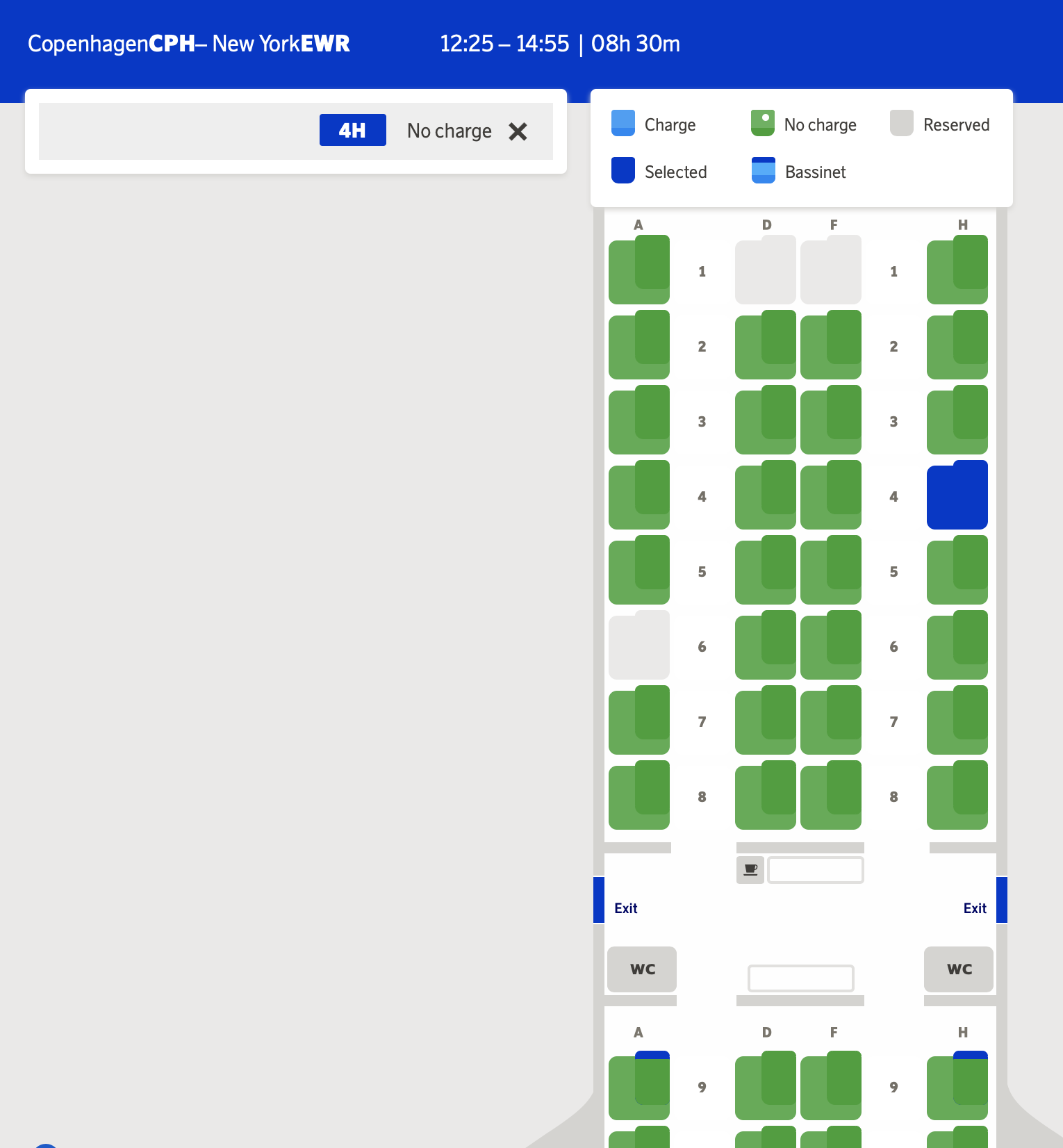 He shared the following thoughts and pictures with me on his flight from Copenhagen to Newark, which I am pleased to pass on to you.

The Only Passenger Onboard: SAS A350-900 Business Class Review

Visited lounge before flight. Most empty. Only Schengen lounge open. Walked right on board and to the seat. FA showed up with an amenity kit. There were what looked like two blankets in the seat, and I put them into the 3H seat for more room.  They were from Hästens, the super-expensive bed people.  But I can’t comment on them as I never used them.

I was the only person in business, including the sector behind the galley. I like the seating.  It is better than most first class and superior to just about any other business except Singapore A380.  It is worth going out of the way for.

Much wider, at least by 6 inches from the outbound [ed. note: he flew United on the outbound].  Really comfortable.

Plenty of foot space without having to twist my toes in like the cheap Air Canada and United.

The work area on the side gives plenty of space for food or drink or documents.  Inside the corner where the electrical items are is plenty of room so things don’t go flying; slightly back and out of the way.  It is where the water bottle is also stored.

Kept the iPhone connected the whole flight and it was safe and out of the way.

Flight time was estimated at 7 hours, 45 minutes.  We pulled back from the gate about 35 minutes late.

Big 15 inch HD TV at the right distance for my glasses to keep all in focus.  Touch screen, and intuitive to use.  It had a handset, but the touch screen was so easy, I tried out most of the options; movie, about SAS, music, drinks, including the cameras on the tail and the one under the cockpit. I did not sleep on the return. Read and watched the two movies.

The movie selection was mostly old stuff, so I selected a Danish film with sub titles, and then an American indie film.

Music selection even more limited. Listened to 4 of 7 (playlists) no Jazz and no Classical.

The wines were listed on the TV, so I knew what I wanted. Started with a Portuguese Red.  Nuts were given in a sealed bag. About an hour into the flight the FA came by with a menu in his hand, which he showed me (I was instructed not to touch). So no printed menu for the passenger, just a photo (this was interesting concept) of the two choices, salmon or chicken.

I did not select the chicken, but he said I could have that too if I wanted.

No more than two minutes after selecting the mean, it showed up hot.  So it must have been already prepared. FA asked if I wanted to change wine, so I selected a white.  He kept filling the glass to that I actually consumed almost the whole bottle while eating the tray.

At the end of food service I asked for ice cream.  He said there was none, but what about chocolate, but not the usual, it was an unusual candy bar.  Then later in the flight he brought me another.

I was intrigued with the alcohol available that I saw under drinks option on the screen.  It had two Swedish whiskies.  He described them and I asked to sample them both.  So he brought both.  After about 20 minutes he came by to ask which I preferred.  He said that usually they have full bottles in business, but he had had to go to the back and get the little bottles for me (they were served in a glass so I did not make the connection). 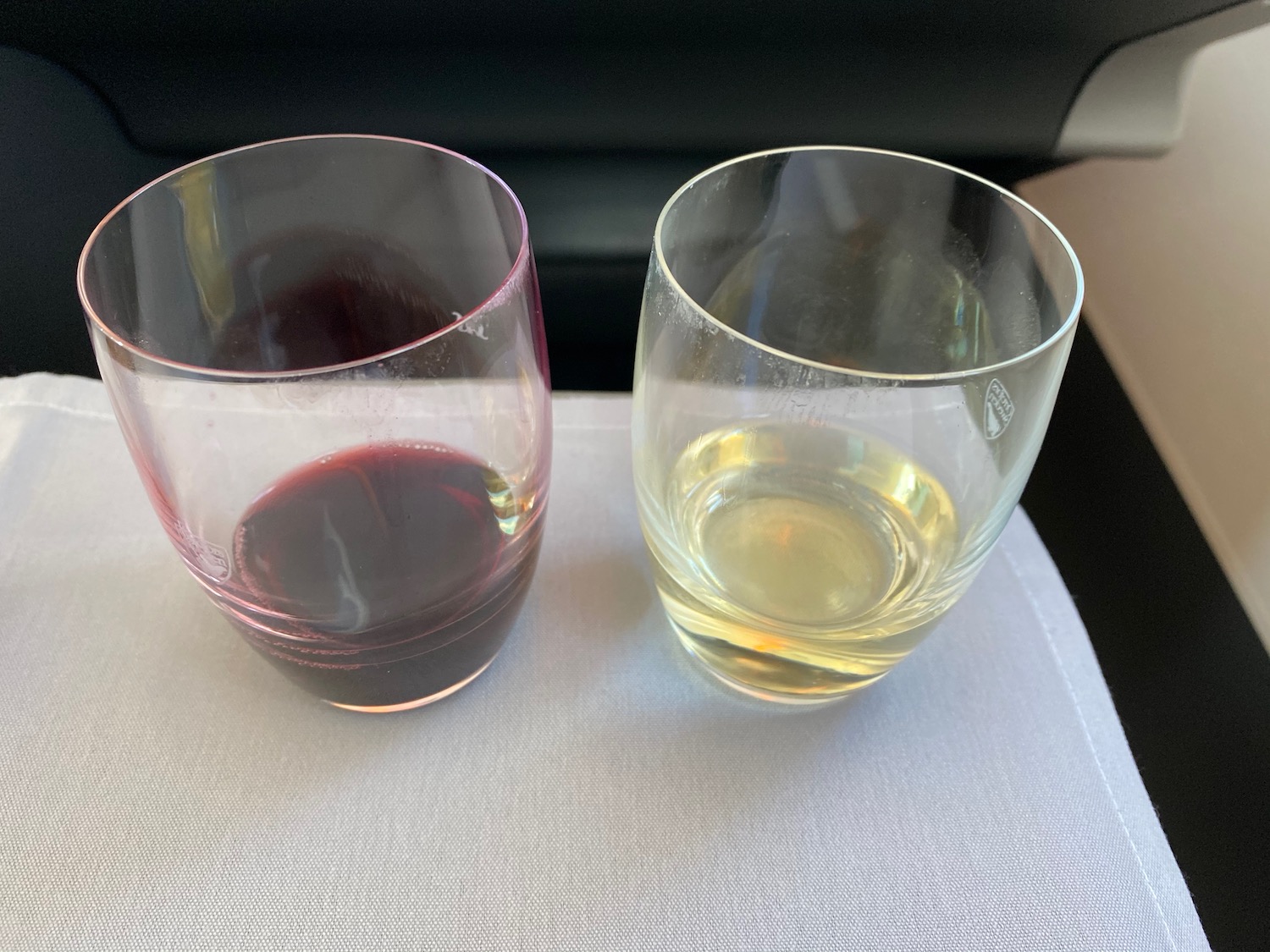 Two thirds through the flight I had an extended conversation with the female FA and a 3rd male FA, perhaps the purser for the flight.  There was a 4th who stayed mostly in the galley and seemed to serve the food.

The first FA who kept filling the wine glass was a former purser who had retraining and now was a FA.  So apparently seniority was also used at SAS for layoffs.

Matthew here. I appreciated this look at the A350 so much and cannot wait to try it myself, especially once full service is restored. The last time I flew SAS transatlantic was on an A330 from Los Angeles to Stockholm and I had a wonderful flight. I look forward to flying the A350 myself.

Have you flown the new SAS A350? What were your impressions?