For my return trip from Algeria, I connected in Qatar in order to sample American Airlines’ new longhaul flight from Doha to New York. Thankfully, I was able to upgrade to business class for the 777-200 journey of nearly 15-hours. I’ll offer my first impressions here ahead of my full review.

A Longhaul Flight On American Airlines 777-200 In Business Class

Oneworld business class passengers are now welcome to use the Al Mourjan Lounge prior to their flight and I enjoyed an excellent dinner, hedging my bet in case the food was lacking onboard. This lounge just keeps getting better…

Turns out that food was not an issue at all. Food was plentiful onboard and I enjoyed a lamb dinner after takeoff and breakfast before landing. In between, there were plenty of snacks available in the galley. It was great to see a real appetizer and a real made-to-order ice cream sundae, something I do not see anymore on United Airlines. I ate a lot more onboard, which I will reveal in the full report. You do not have to worry about going hungry in American Airlines’ business class.

Stepping onboard, I was startled to see the “other” 777-200 business class configuration with rear-facing seats. My aircraft was scheduled to have the traditional reverse herringbone seats so to see these seats was a surprise (though I have never reviewed them, so that was a positive…).

The downside to these seats is that personal storage is severely lacking. The upside is they are private and still comfortable. 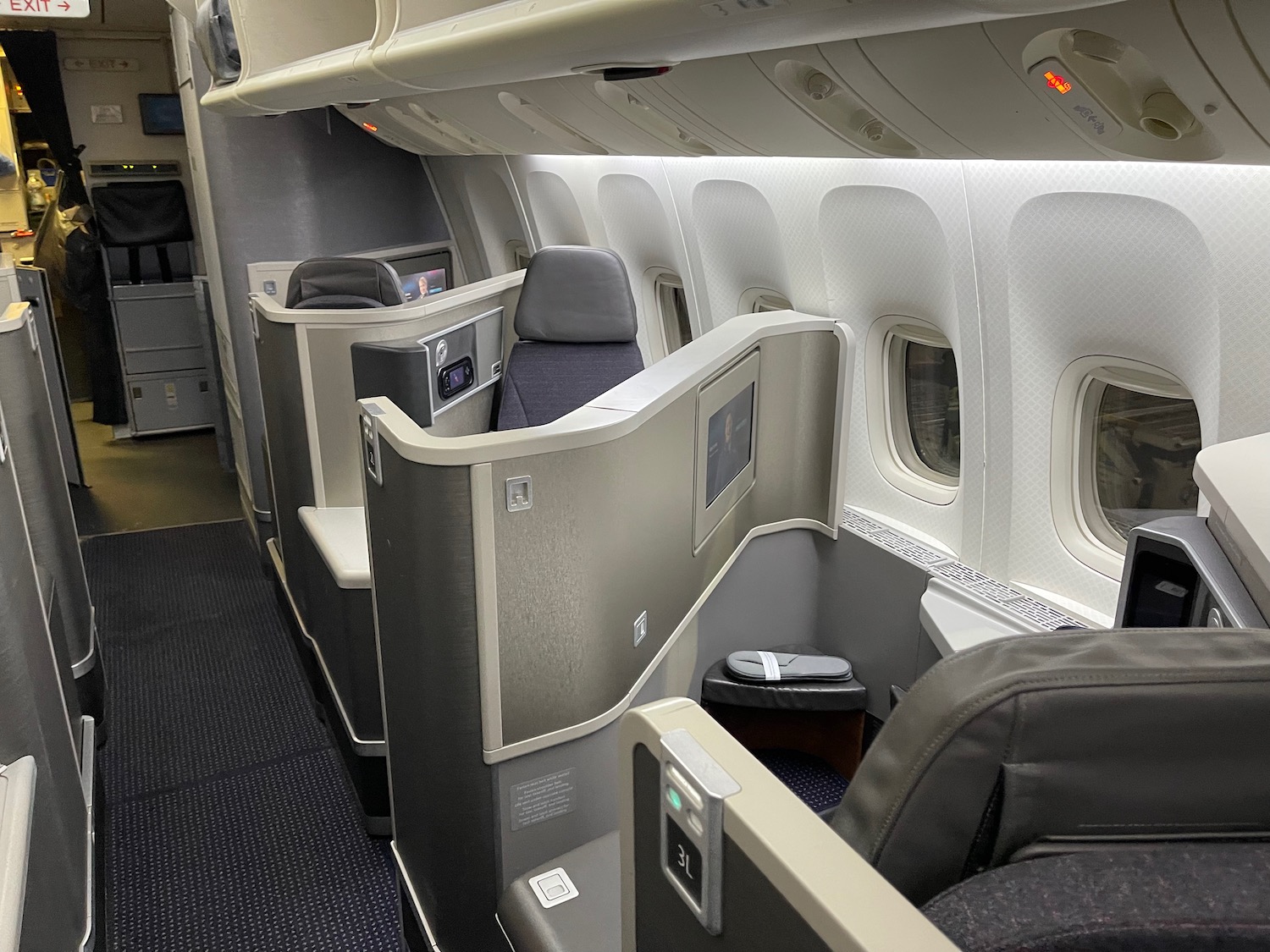 Between meals, I spent the vast majority of the flight sleeping. The Caspar bedding, including the mattress pad, was excellent and aided in my sleep. As for the crew, I later found out they were quite suspicious at first when I took so many pictures upon boarding. But they never said anything. I felt the service was cold a first and there was preference given to the non-rev travelers in the cabin.

But during the flight, the service got better…much better, actually. Kimberly, the purser, was charming and took great care of me. Kathy and Juliet were also attentive and kind. I really thought it was going to be one of those horrible AA flights with grouchy FAs, but I am very thankful just the opposite occurred. It was Kimberly who told me they were a bit “concerned” about my photos, but when I self-deprecatingly said I was just a crazy av-geek, all was well.

One thing that irked me was that I forgot to ask for pajamas and they were not handed out proactively. Not that I need any more airline pajamas, but I would like to have tried them.

There was quite a bit of headwind, delaying our arrival at JFK by 30 minutes.

Overall, I give the flight a positive review. I will share a lot more details in the full review, including about the other amenities onboard, IFE, and full menu of food and beverage choices.