Home  >  Capital One • Credit Cards  >  Don’t Lose Your Capital One Card, They’re Irreplaceable
My dear readers, some links on this site pay us referral fees for sending business and sales. We value your time and money and will not waste it. For our complete advertising policy, click here. The content on this page is not provided by any companies mentioned, and has not been reviewed, approved or otherwise endorsed by these entities. Opinions expressed here are the author's alone.

I temporarily misplaced my Capital One card and called for a replacement. Hilarity/tragedy ensued.

I Lost My Wallet

While in Paris, I temporarily lost my wallet. I recovered it a few hours later, but it was left in an Uber and once I was sure it wasn’t on my person I called my cards in as lost. I walk with very few cards, especially in areas like the Eiffel Tower where pickpockets are known to be present and I may be distracted.

Regardless, I lost my wallet for the first time I can remember as an adult and though I found it shortly thereafter, I called to cancel my cards in the interim which was likely the safest bet. The three banks I was carrying cards from at that moment were American Express, Chase, and Capital One.

The biggest concern with losing my cards, and why it felt like a race to stop fraud, was because of the widespread use of contactless payments. While signatures were never a truly secure method in my eyes, chip and pin meant that losing a card would be harmless and the rush to replace lost credit cards would be an unnecessary effort. But with the advent of contactless payments anyone could charge virtually anything to the card unchecked. We had used contactless payment at nearly every purchase.

When I went to call Capital One customer service, I sat on hold. The call center number listed online was hard to find even on the bank’s website to report lost cards. Yes, I could have done it in the app, but I didn’t have the app installed at the moment. I just hadn’t needed to at this point so I never did.

I encourage any credit card owner to put themselves in the shoes of someone who has misplaced, lost, or been robbed of their cards and then click on this Capital One link for lost cards. Of the *helpful* tips it offers: 1) Retrace Your Steps, 2) Report The Loss or Theft Right Away (without the phone numbers to do so), 3) Keep An Eye For Statements, and 4) Update Your Autopayments.

In case you were curious, I ticked the box “no” that wasn’t helpful at the bottom of the post.

On my second attempt I found this on another page but had to search replacement as “lost” and “stolen” come up with the above tips.

Of course, their system wouldn’t let me report my card lost or stolen or even get me to a human being without first submitting my card number – which I didn’t have. First, I lightly pressed “0” and when that didn’t work, I pressed it more than 16 times because the system needs to hear 16 numbers apparently, even if they are all zero.

After a 14-minute call in which the representative not only wouldn’t send the card to my travel address (I am traveling, this is not uncommon for cards that are marketed to travelers), they wouldn’t send it anywhere until I submitted my Federal or State ID through a secure link to an email on my account. You’ve got to hand it to Capital One for applying that personalized customer service, “KYLE null.” 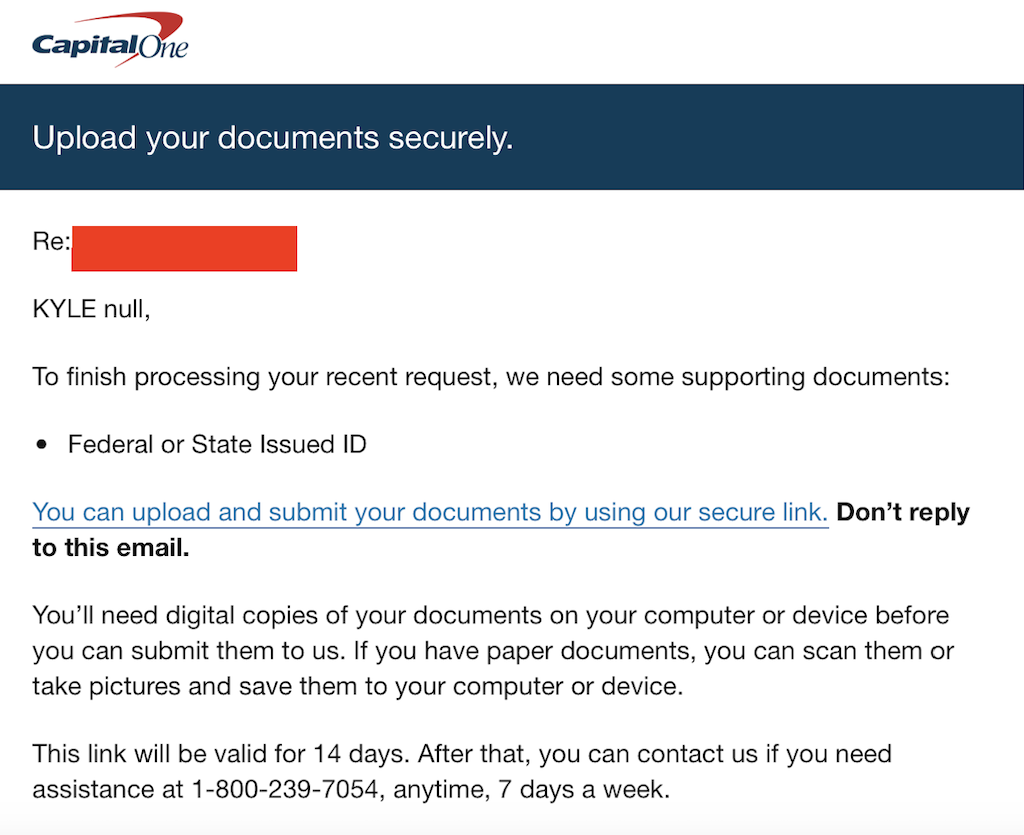 That was a fair enough request given the sensitivity of the information. I complied, though that took some effort because Apple converted all of their photo file types to HEIC and Capital One doesn’t accept them. I had a computer handy and followed the instructions assuming the card was on its way… somewhere.

A week later I received a garbled call while I was at Universal Studios instructing me that my federally-issued passport was not a state-issued ID and that I would have to submit my state driver’s license. I argued for a moment about the seniority of documents, explained that a passport was federally issued and was an acceptable choice but alas it was of no use.

I repeated the effort, uploading my driver’s license through the secured link using the proper image type.

How Other Banks Faired

I first called Chase as I had a couple of cards from them with me, including a debit card which offers fewer protections. The call lasted just over nine minutes, three cards were replaced and shipped to me at a traveling address I’d arrive to in a few days.

My next call was to American Express as some of their cards feature no limits and my exposure could be large if someone had nefarious purposes with my lost card. That call, like Chase, last just over nine minutes and like Chase, American Express shipped the new card to a hotel I’d be at in two days time. It was waiting for me at check-in.

As of six weeks following the first report and accepted upload of my federally-issued ID, and five weeks after the upload of my state-issued ID I have yet to receive anything at all. Not a note to say that a card is on the way, or that my documents were in some way insufficient. I’ve not received a notice that my account has been closed, nor a request to close the matter as resolved or unresolved.

I intend to follow-up this week, but as an experiment I left it to be able to report back to our readership how each bank performed. However, it’s been so long, I nearly forgot that I had the card at all.

Capital One’s credit card customer service in the event of a lost or stolen card is absolutely atrocious. I know that Matthew has been very happy with the Capital One premium card he has, but then again, he hasn’t lost his yet. If Capital One wants to play in the premium credit card market, they need to offer premium credit card services to its clientele. Alternatively, they could revise their protocol, I can’t imagine a single executive for the bank would have gone through this and said, “yeah, that’s a good process.” A word to the wise, don’t lose your Capital One credit card, it’s literally irreplaceable.

What do you think? Have you had a similar experience with Capital One? How did other banks treat you when you lost your cards?