What is it is like to fly United Airlines Polaris Business Class To Brazil? This review highlights my journey from Chicago to São Paulo on a 787-9 then from São Paulo to Houston on a 777-200.

My flight from Chicago to São Paulo was operated by a Boeing 787-9 that had not yet been retrofitted. With only a dozen passengers seated in business class, my friend and I had the entire rear business class cabin to ourselves and our own flight attendant, the lovely and amazing Karen Braum. I “name drop” her because she was simply the best–so attentive, so friendly, and such a joy to be around. Reports of bad service in the air always leave me curious (not so much in the lounge) as I routinely experience flight attendants who love their job and take great pride in showing excellent customer service. I saw it on the way to Chicago with the pair of flight attendants who helped a disabled old man into the lavatory and I saw such a joy in Karen, a contagious joy that could not help but to make me smile.

United used to offer wine flights in Polaris Business class. Using beautiful glasses and a special three-glass holder, passengers could sample the different wines on the menu in order to choose a glass that best suited them.

It was a popular part of the Polaris soft product, but was cut in 2018 after United said it encouraged people to drink too much alcohol (not because people got drunk and misbehaved, but because the wine budget was not just broken, but exponentially broken).

Well, when I asked Karen which white wine would pare best with my fish, she brought out all three bottles, three plastic cups (oh, United…), and created a wine flight for me. The clear winner was Weingut Bründlmayer from Austria. Not only was the wine tasty, but it was so much more enjoyable after having tasted the other choices. (And so much better in my own glass, which I brought from home)

If you’re a regular reader, you know I often try to squeeze a second meal out of an airline. I don’t consider myself a glutton (my 30 inch waistline attests to that, though perhaps I should refrain from such introspection), but I do have a very healthy appetite and when I have fish, I like to have pasta with it.

Since the cabin was only booked 12/48, I figured there would be plenty of meals leftover and requested one. There wasn’t! Twice in a row that has happened from Chicago! While I am happy that the O’Hare flight kitchen is not catering for full cabins on mostly-empty flights, I would have enjoyed some ravioli with my fish.

Not to despair, Karen found me a spinach pasta dish from economy class, which actually hit the spot quite nicely. The fish featured beurre blanc sauce and served with risotto, green beans, and peppers, plus a tasty salad of mango, cabbage, onions, and cilantro. Vanilla ice cream for dessert (thankfully United finally seems to have run out of its supply of mango sorbet…). The bread was warmed.

And then I slept for eight glorious, uninterrupted hours.

Ah yes, the seat. I suppose I should mention it. While the 2-2-2 B/E Diamond seating is past its prime, if you choose a bulkhead seat you’ll have plenty of room for your feet, which makes sleeping much easier. United is currently about halfway done with its 787-9 retrofit program. 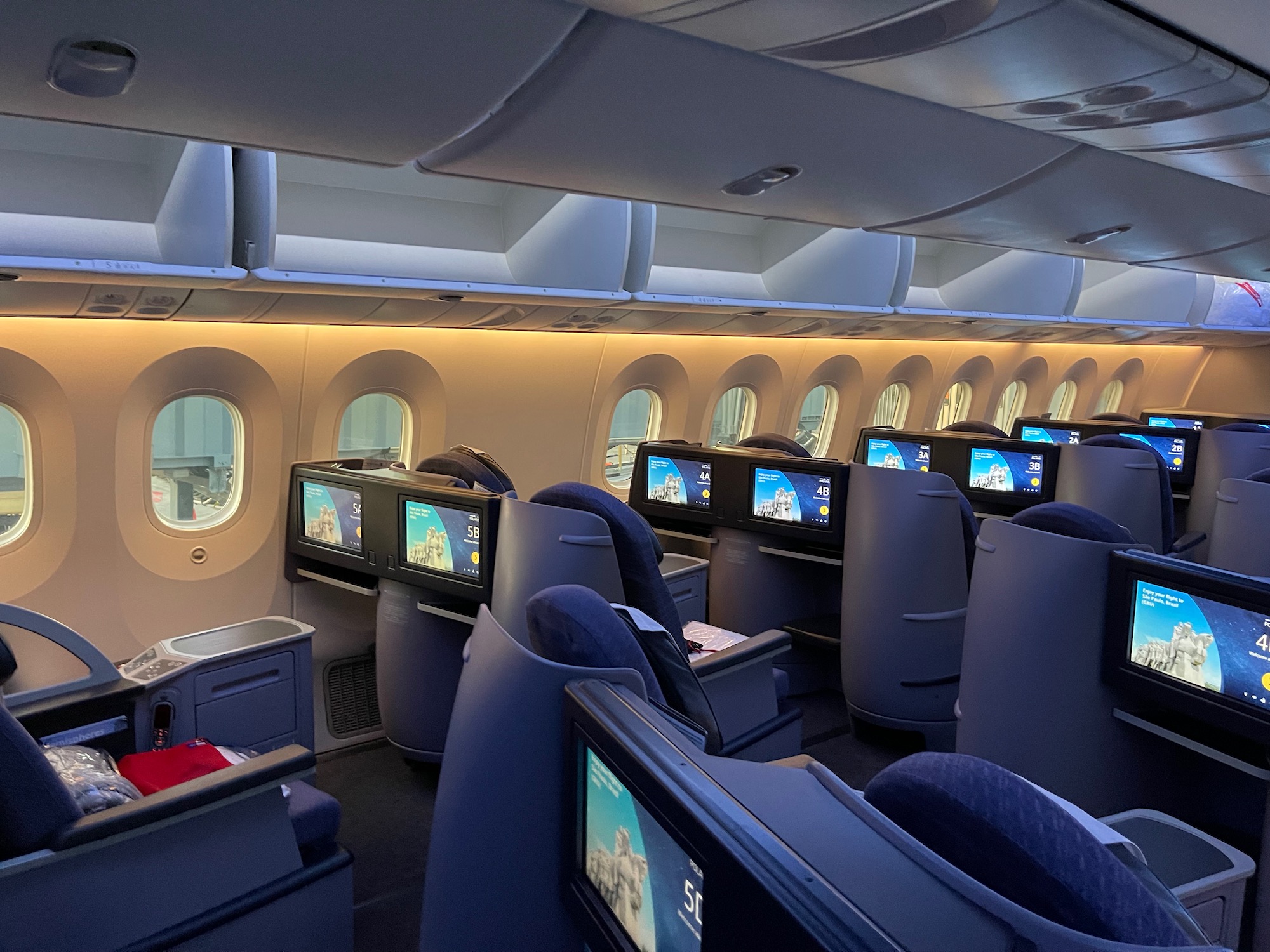 Curled up in my warm blanket from Saks Fifth Avenue, and a pillow case stuffed with blankets, I slept well.

Brazil, due to coronavirus concerns, prohibits pillows on airplanes. Because pillows are not allowed, United creates a faux-pillow by putting the daytime throw blanket into a pillow case. While my friend cannot stand it and brings his own pillow onboard (he frequently travels to Brazil), I didn’t really notice the difference.

I appreciated the slippers, which were proactively offered. I woke up, looked at the screen, and saw landing was in 34 minutues.

Great, I slept through breakfast…

Oh no, not on Karen’s watch.

She magically appeared moments after I stirred, wished me a good morning, a cup of coffee, then offered breakfast.

Standard protocol calls for breakfast service beginning 90 minutes prior to arrival. But in an empty cabin, there is no need to start that early. While 34 minutes is pushing it, Karen brought out my breakfast tray and presented it to me with a smile.

Breakfast this morning was a croissant (warmed), a bowl of fruit, yogurt, and egg whites with potatoes, chicken sausage, and a finely red sauce with a great kick to it. As I finished breakfast, we were already beginning final descent into Brazil. This flight was truly a treat. Karen is a treasure United should hold onto I slept for over eight hours. What more could I ask for?

I don’t have nearly as much to say about the trip home, so I thought I’d include it here.

I was pleased to see my flight featured the new Polars business class product, which is much nicer when you are traveling alone. The purser was quite pleasant and went around the cabin introducing himself and welcoming each passenger onboard. He also took meal orders and dinner showed up very shortly after takeoff.

Steak on a plane is a risky bet, but I decided to chance it since we were departing from Brazil after all. Not only was I not disappointed, I enjoyed a wonderful steak dinner cooked medium rare with a lovely chimichuri sauce, roasted potatoes, and cooked zucchini and carrots. On the side was a green lead salad with cabbage, olives, tomatoes, and fennel.

No dessert was served.

But the “supper was perfect” and I fell right asleep afterwards, awakening about an hour before landing. Breakfast included a plain omelet topped in parsley with mushrooms, onions, sausage, potatoes, and cooked tomatoes. On the side, a hot croissant, strawberry yogurt, and sliced fruit. Two good meals out of Brazil, plenty of sleep…and that was the flight. I quite enjoyed my trip to Brazil on United and look forward to returning to Sao Paulo again and visiting Rio (for the first time) later this year. United’s product is quite predictable, but when you have a flight attendant like Karen, your flight goes from satisfactory to amazing.