I returned to Chef Geoff’s at Washington Dulles last week for dinner and wanted to update my review of this Priority Pass restaurant. I’m happy to report the food was excellent.

I arrived at 8:45 pm ahead of my 10:15 pm flight and was promptly seated. Examining the menu, a new dish caught my eye: the chicken shawarma bowl. 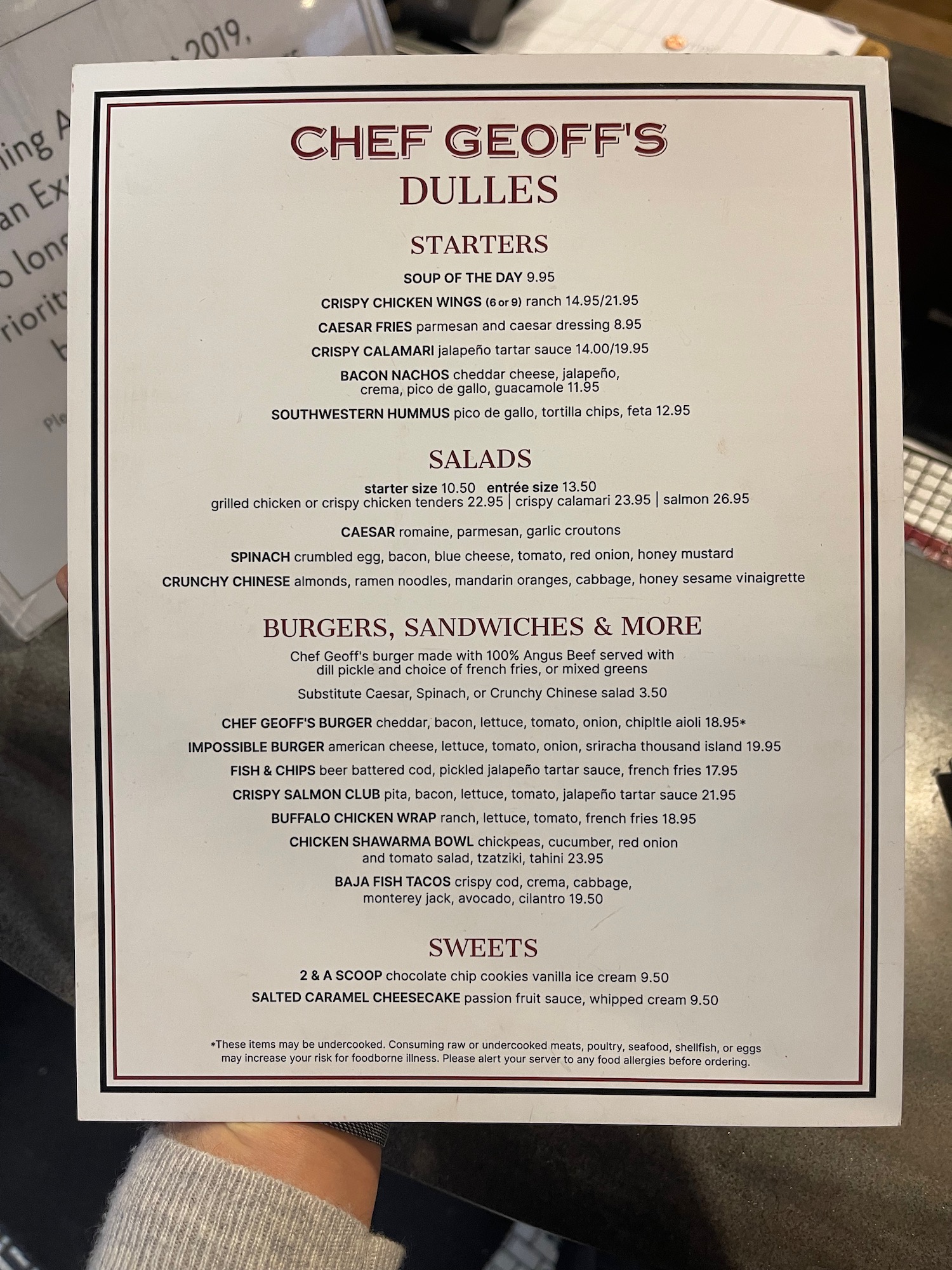 A waitress showed up moments later and I ordered it. About 10 minutes later, it arrived. Along with the chicken, the dish included chickpeas, cucumber, red onion, tomato salad, tzatziki, and tahini. 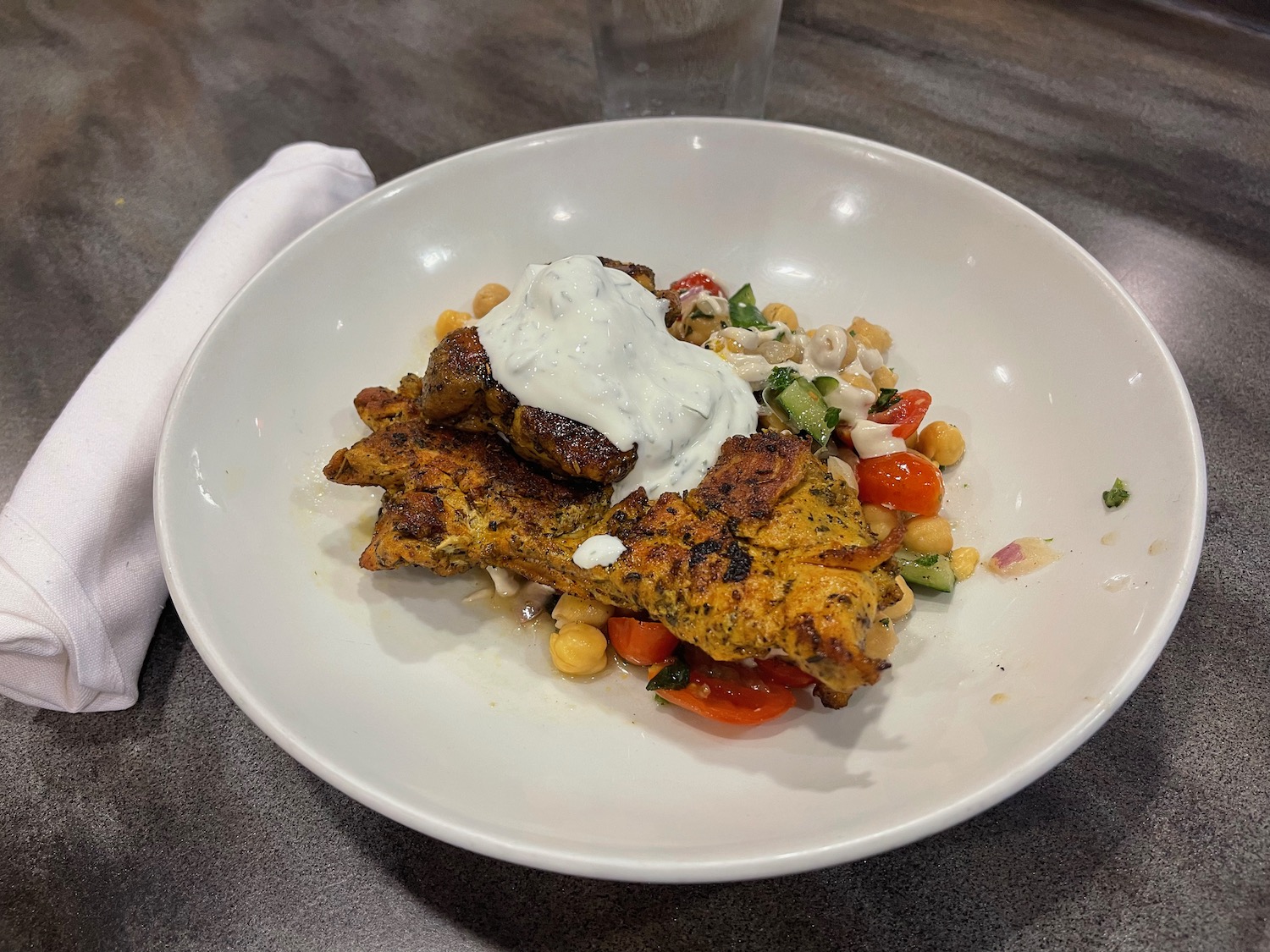 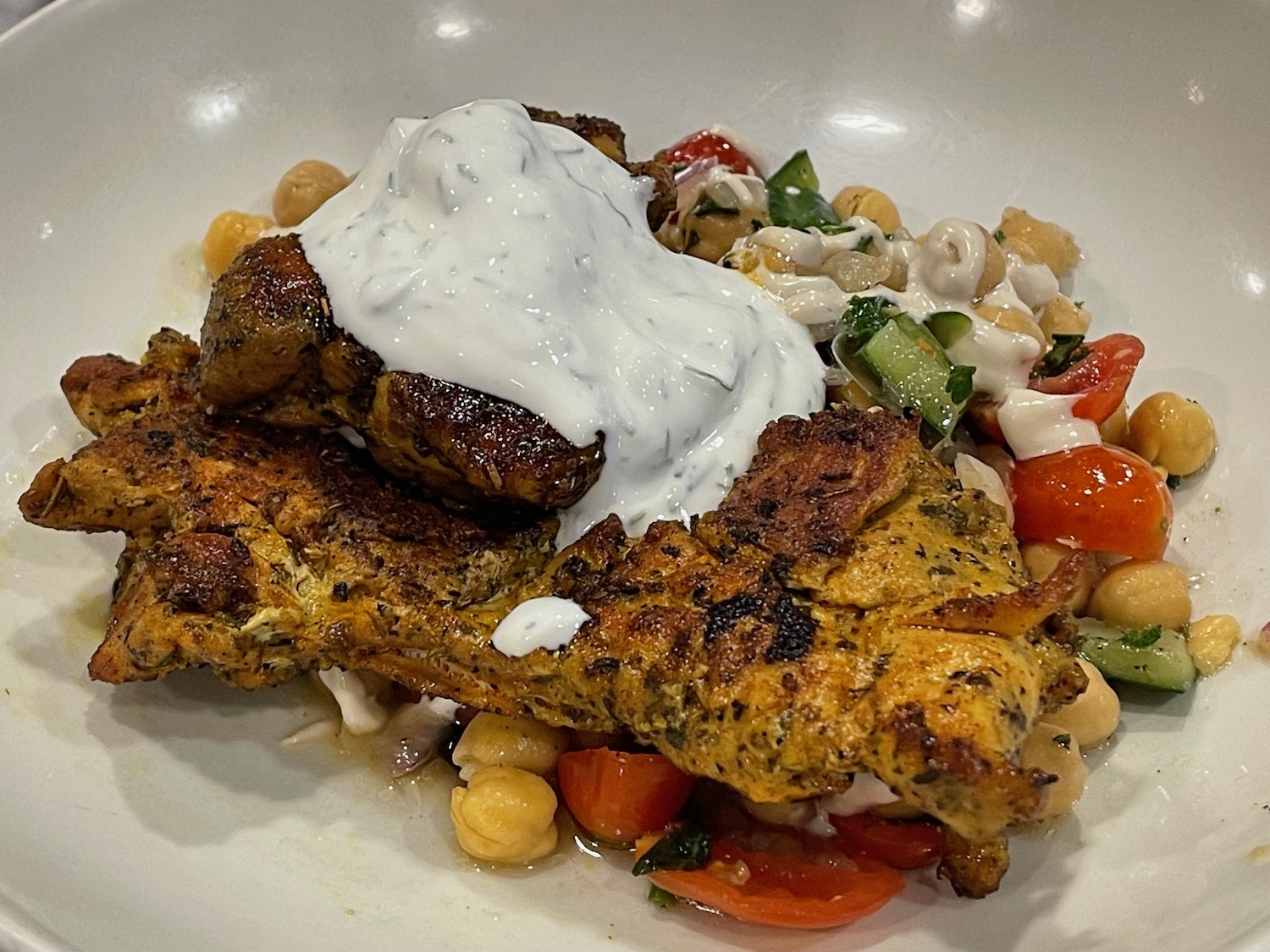 While not shawarma chicken (more like a thigh), the chicken was seasoned nicely and the ingredients meshed well. I was satisfied with the dish. 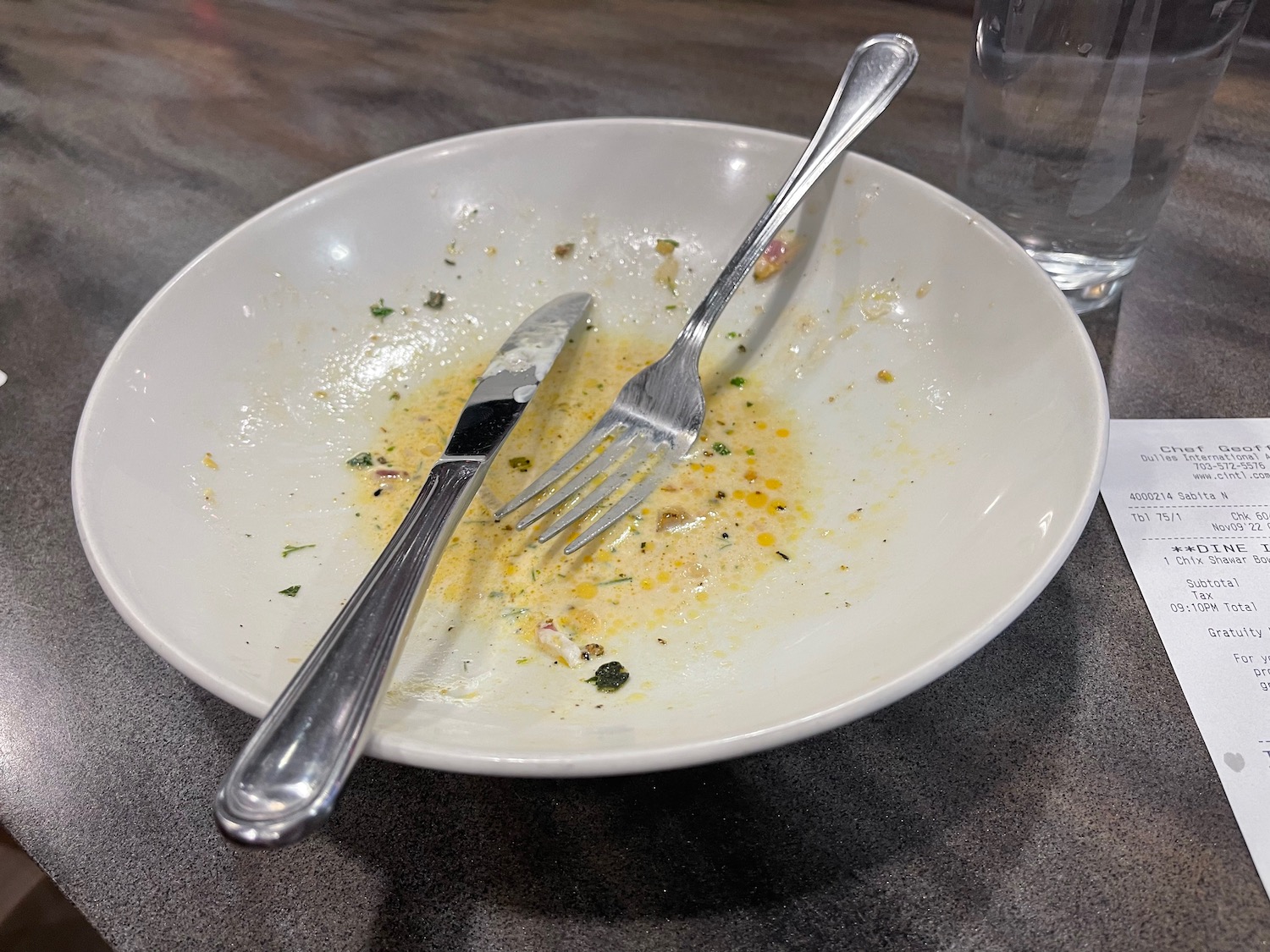 Overall, an efficient and delicious experience. While the food in the United Clubs is not horrible (you cannot go wrong with soup and salad), this was a heartier alternative.

My original review, from 2020, appears below. 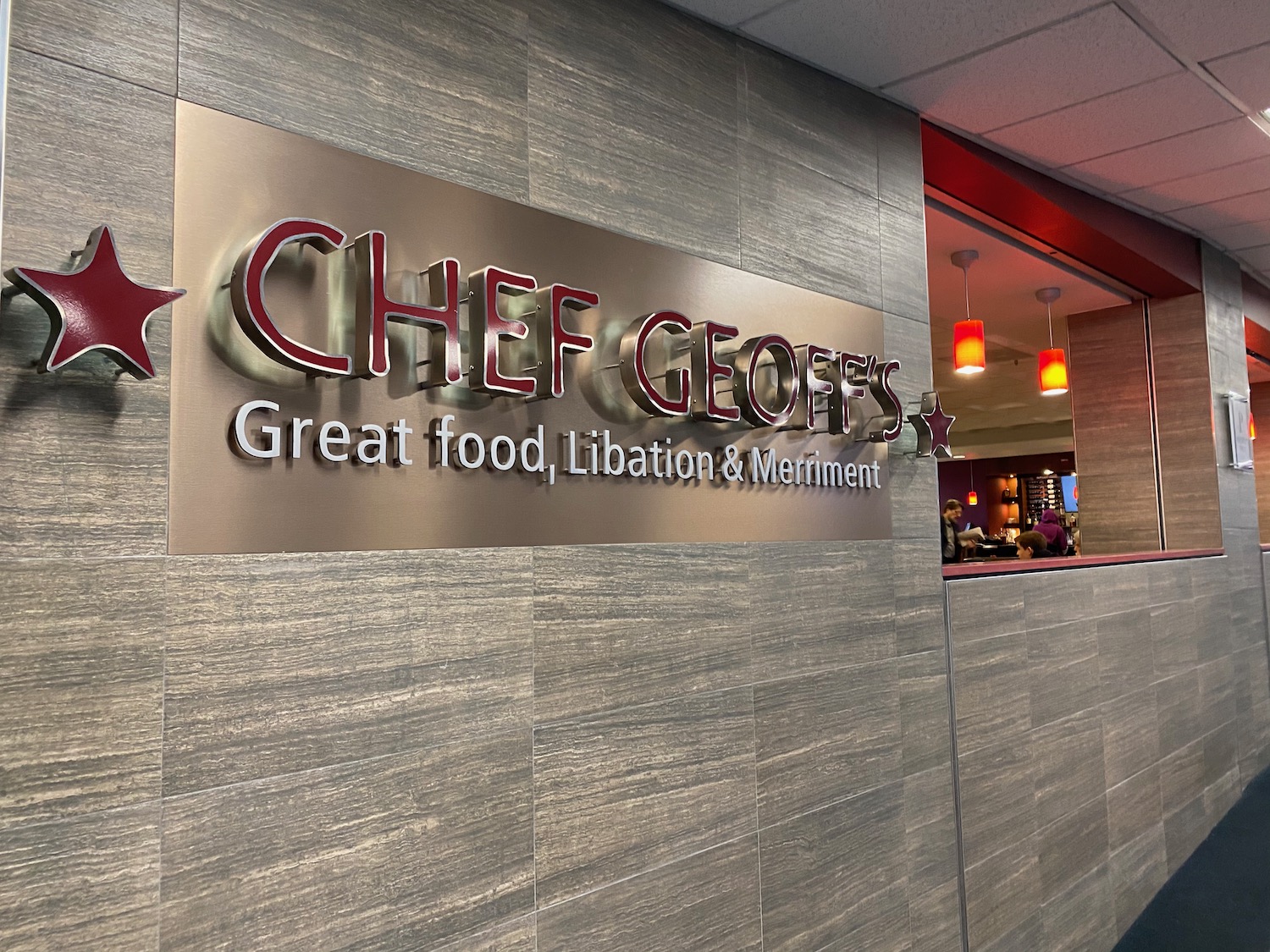 While Washington Dulles has many nice Priority Pass lounges, if you ever feel like a more proper sit-down meal, Chef Geoff’s is also part of the network and a decent option for pre-flight or post-flight dining. This review of Chef Geoff’s Dulles covers breakfast.

You’ll find the restaurant in “temporary” Terminal C, near the walkway to the AeroTrain station (across from Gate C14).

The restaurant is currently closed due to the pandemic, but is normally open from 6:00am to 10:00pm daily. I stopped by after my redeye from San Francisco to eat breakfast. Arriving at just before 7:00am, I noticed the restaurant was fairly full, though there was no wait for a table. Once seated, a waitress quickly appeared and offered me a cup of coffee, which I gladly accepted (though the coffee was hardly memorable). I examined the menu: 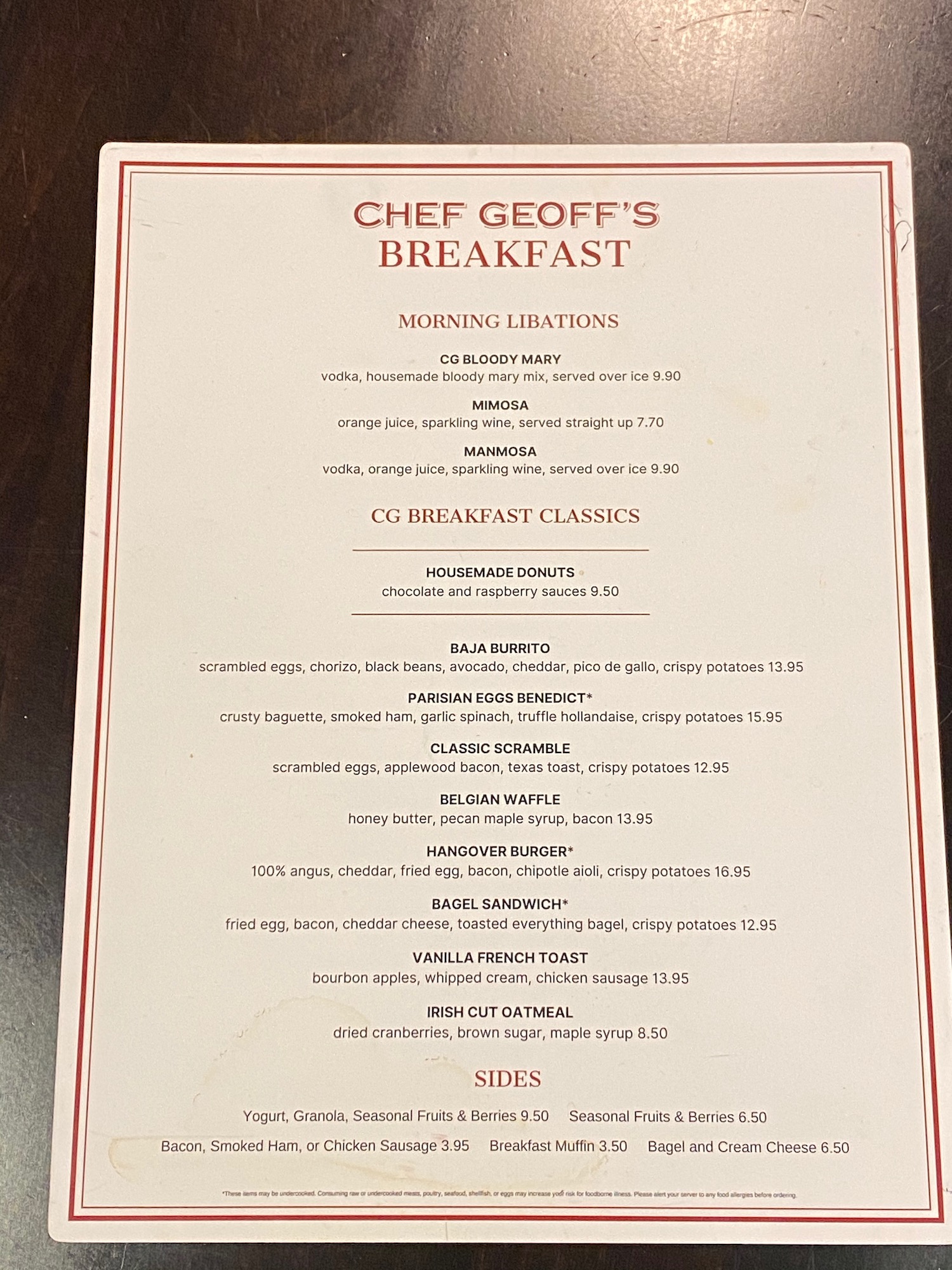 While the eggs Benedict caught my eye, I ordered the Baja burrito…I rarely eat chorizo (don’t google it if you don’t know what it is…you’ll be sorry) and am always in the mood for a burrito.

I also ordered a bowl of fruit. Both arrived at about the same time, roughly 10 minutes later. Almost everyone was paying by Priority Pass card and I felt sad…neither the guy sitting to my left or my right left a tip for the waitress. Hey guys, if you want Priority Pass to keep its restaurant program, I suggest you tip your waiters or waitresses.

My bill was also under the $28 credit so I technically did not have to open my wallet, but I still handed my card to the waitress and told her to charge $0.01 so I could leave a tip. I hate our tipping culture in America, but these workers depend upon it. Let’s not let them down.

After spending a few hours lounge hopping, I returned to the lounge…just to see if I could dine again (the lunch menu looks much better than the breakfast menu). Nope–my card was denied. They told me it was once every 24 hours. Too bad, as I probably would have saved my “free” meal for an Atlantic salmon lunch. 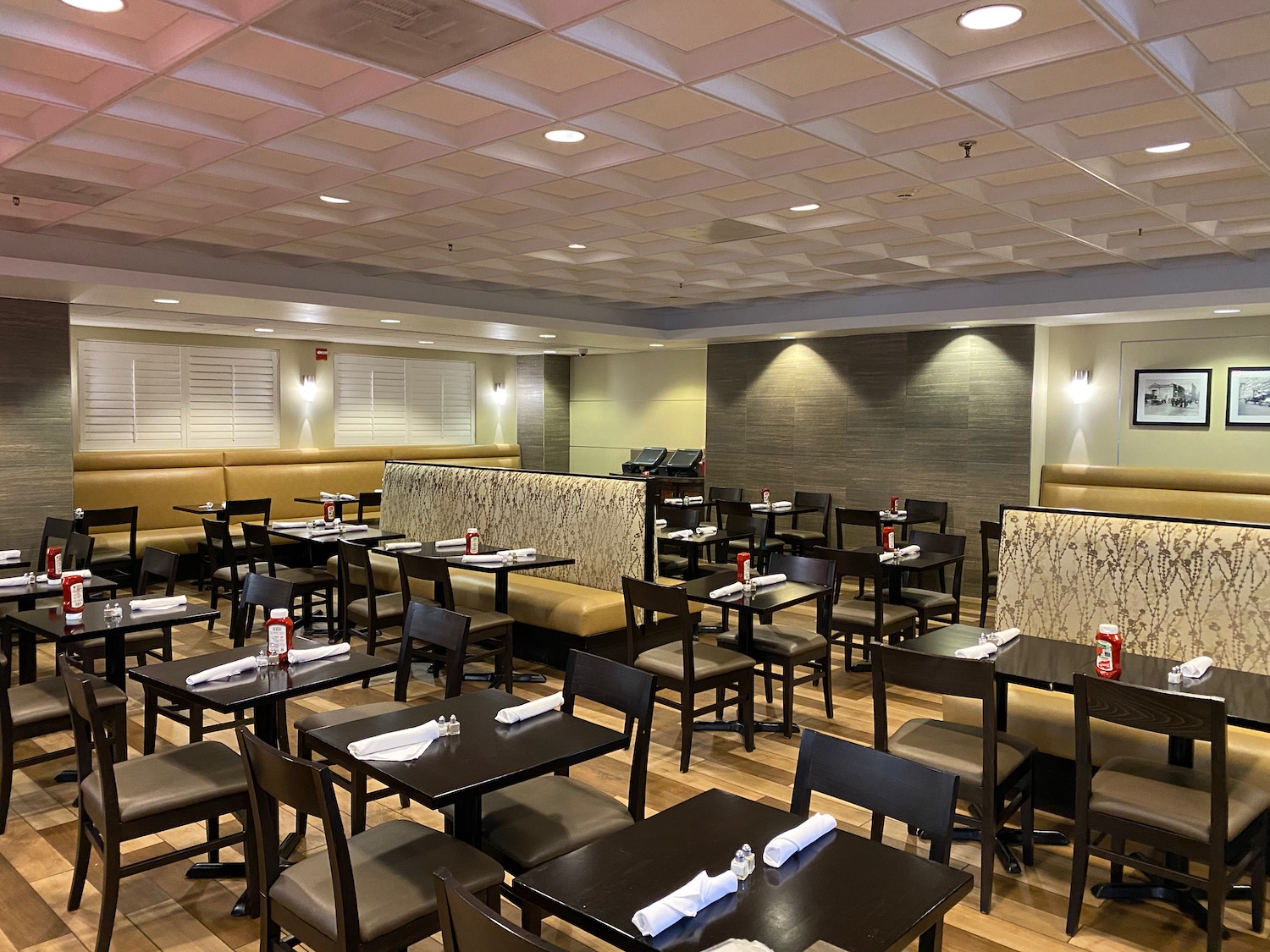 For a $5 tip, this was well worthwhile. Would I have ever paid $30 for this breakfast? Absolutely not. So by all means, use your Priority Pass credit here (and tip), but breakfast is hardly remarkable.