Home  >  KLM • Lounge Reviews  >  Lounge Review: KLM Crown Lounge Houston (Priority Pass)
My dear readers, some links on this site pay us referral fees for sending business and sales. We value your time and money and will not waste it. For our complete advertising policy, click here. The content on this page is not provided by any companies mentioned, and has not been reviewed, approved or otherwise endorsed by these entities. Opinions expressed here are the author's alone.

I had a chance to visit the KLM lounge in Houston, Texas (Houston Bush Intercontinental Airport – IAH), and here’s why you should give it a pass.

The KLM Crown Lounge is located in Houston George Bush Intercontinental Airport’s Terminal D where foreign carriers typically depart. The lounge is conveniently located just across a bridge walkway from the C and E terminals. The same walkway is at the base of the escalators that lead to and from the intra-terminal train system. From a perspective of entering the terminal, the lounge is one of the most convenient, it’s also across from the Duty Free shopping area. However, for passengers departing on KLM flights from gate D13, it’s farther away than the Air France lounge directly across from those departing gates. If location is the sole factor when comparing the Air France vs KLM lounges (Houston) then in this (and only this) category, Air France would be the better choice.

While I am a Priority Pass Select holder, I was a business class passenger from Houston to Amsterdam and thought I would give it a try to start my first KLM experience. Due to flight loads and a preference to offer space to its passengers and elite frequent flyers, it may restrict lounge access around its daily departures east to Europe for both KLM and Air France flights.

While much larger than the embarrassingly small Air France Lounge, it’s still far smaller than some of the other lounges available in Houston. 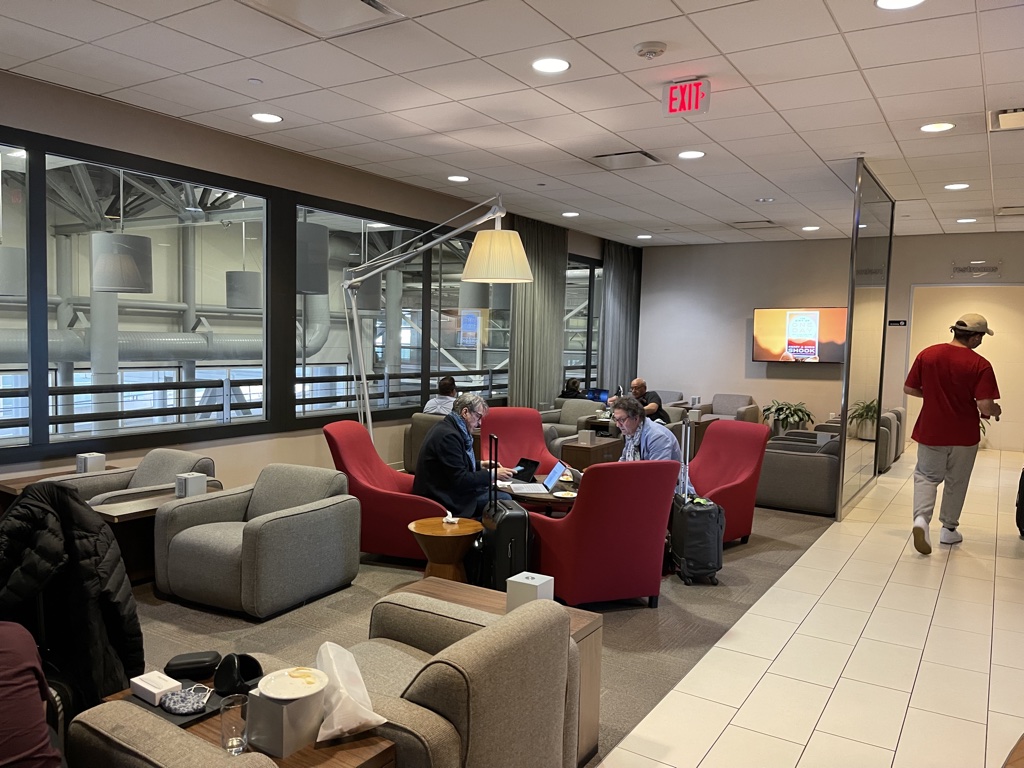 Despite arriving two hours prior to my departure time as a single guest, I struggled to find seating and felt guilty occupying one of the last tables which sat as many as four guests.

Additional seating is available at the end of the hallway away from the main portion of the lounge.

Imagine a vending machine that only had 4-5 choices and didn’t require any change to purchase – that dream world is is roughly 70% of the food offerings from the KLM Crown lounge. The lounge does offer a smattering of hot and cold prepared items but staff had trouble keeping them stocked. When I initially arrived, the soup was out for about 20 minutes. Salad was offered intermittantly as was a cous cous dish that was, admittedly, very good. If I had not been to the Air France lounge before I left, I would say this is the worst lounge at any Houston airport. No self-serve drinks other than juice at the lounge, you must wait for an attendant to “serve you.” I almost never drink anyway, so it wasn’t that big of a deal for me to ask for someone to grab me a Diet Coke, but even casual drinkers will find the selection limited and it’s in no danger of becoming a watering hole for abusers of open access to adult beverages.

As this KLM Crown Lounge is at an outstation with a single daily flight, it’s understandable that some of the normal lounge conveniences are missing. Of the most basic, however, is a shower but this lounge doesn’t offer one. Even the limited Converse Bank lounge in Yerevan, Armenia offered a shower for those in desperate need.

There are no sleeping areas, no extras like a Playstation area in the Air France lounge in Paris, or a barber shop at the Emirates lounge in Dubai. Essentially, if the gate area is crowded and you’d like a light snack that may or may not be available, consider the KLM Crown Lounge.

Assuming a passenger does not have access to alternative lounges like the nearby American Express Centurion lounge, the United Clubs throughout the airport, or (depending on the access) the unbelievable Polaris lounge – this particular lounge will do. However, considering there is no self-serve alcohol, very limited food options, no shower, limited space, and wi-fi is available for free throughout the airport, I’d recommend spending your time somewhere else.

In fact, if you’re a Priority Pass Select member through the Chase Sapphire Reserve credit card, try Landry’s instead where the cardholder and a guest are entitled to $28/each from the menu with essentially the same amount of space, free wi-fi (throughout the airport) but seafood from a proper kitchen.

Given the amount of SkyTeam flights out of Houston including KLM, Air France, Delta, and LATAM (among others) it might be time for the alliance to consider investing in an updated centralized lounge as they operate at other major outstations.

What do you think? Have you been to the KLM Crown Lounge in Houston? How was your experience?