Our daughter was a little hesitant to try some of the rides at Universal Studios but there’s magic to be made. One employee made all of the difference.

Our seven-year-old daughter, Lucy, is generally brave. She’s not afraid of new food, new places, new things and with all due respect to those who struggle with picky eaters, she’s not a chicken nuggets connoisseur. However, we were having a difficult time with new rides at Universal Studios Orlando and she simply wouldn’t try new rides without considerable coaxing.

It’s not a good look for the parents of a trembling, crying child, to force them on to a ride. For those rides where we could encourage her to face her fears, she loved the rides, rating them all between 8/10 and 10/10 and going on them again and again.

#UOFistBump to Tyler Who Made Our Daughter’s Day We were having trouble at the ride entrance to Harry Potter and the Forbidden Journey, a simulator ride using a combination of motion, animatronics, and video elements to deliver an immersive experience. We snaked through the halls of Hogwarts castle to the front of the line and she was visibly upset. A Universal Team Member stopped us before boarding and asked if she was ok, addressing only her which I appreciate. After discussing why she was scared, the Team Member tried to allay her fears, but she was still unsure if our daughter should ride so she brought in a supervisor, Tyler.

Tyler came over and talked to our daughter. He explained the ride, he explained the parts that she might be afraid of, and when she was still on the fence, he bribed her.

“If you ride and you have a good time, I will get you something from the gift shop.” With this, her eyes lit up and we were off. She loved the ride, and as we exited, Tyler was there to greet us. True to his word, he escorted us down to the gift shop and said she could have whatever she wanted. I would have pointed her to something a bit more expensive, but she was drawn to a Hedwig backpack (an owl character from the films.)

Without hesitation, he comped the backpack for which she was incredibly grateful. We could afford the backpack, it wasn’t about the money. Tyler listened to her, gave her a reward based on her enjoying the ride, and then followed through on it.

Her countenance changed from that point forward. She became far braver, and while trepidation remained for some rides – even far larger ones like Hagrid’s Magical Creatures Motorbike Adventures. It’s little gestures like this that really make the experience worthwhile for everyone involved, and make magical memories for our daughter. The full immersion of The Wizarding World is part of what makes it so great. It allows guests, young and old, to really step inside these works of fiction and become a fully engulfed in their world. For our daughter, one of the most magical experiences was visiting Ollivander’s Wand Shop in which she was paired with a wand in an elaborate production that also introduced her to using the device throughout the park. 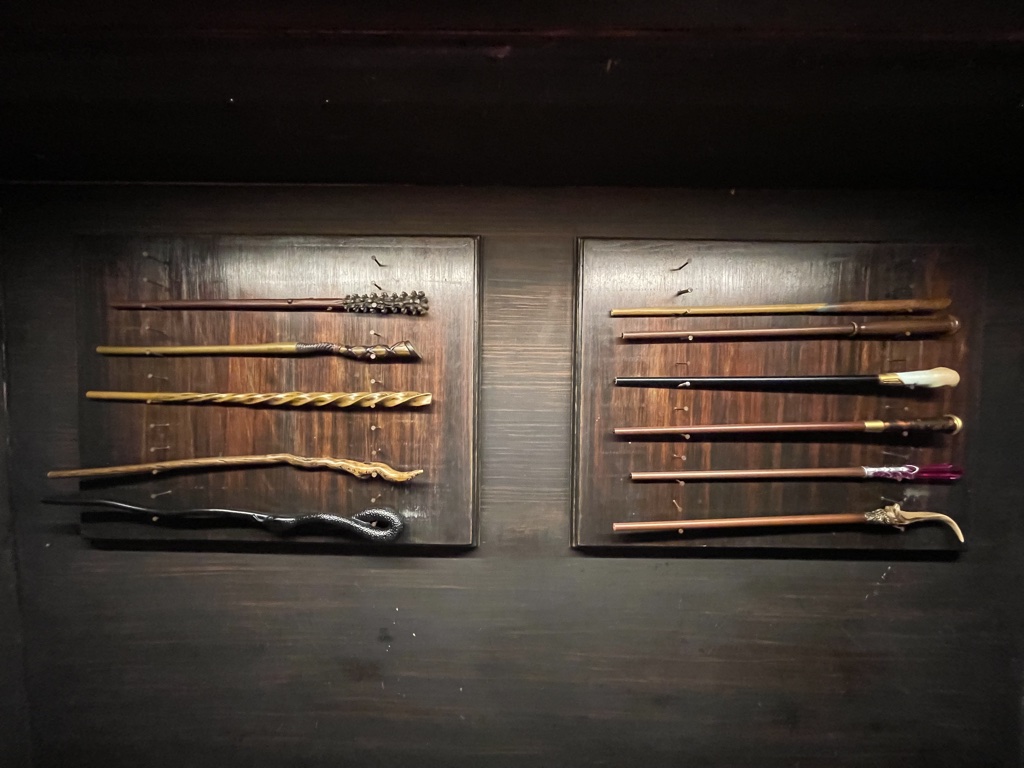 She’s old enough to know the difference between a “show” interaction, and a genuine experience but still, this allowed her to escape into the magic some and feel a part of it all. She wasn’t the only one. I was captivated watching it all. Sure, they use simple and inexpensive technology to make the wands work, the “spells” are simple and obvious – but she loved it and that made me love it too. I don’t know the Team Member’s name that was working in Ollivander’s during our visit, but he was out of a storybook. The focus on our daughter made the entire day magical. My family thoroughly enjoyed our time at Universal and the entire team did an amazing job of creating magic in a way that is rarely matched. A special acknowledgement (#UOFistbump to Tyler) for making it “the best day ever”, a phrase we hadn’t heard our daughter say as far as I can recall.

What do you think? Have you been to Universal? Did a team member go out of their way for you or your family?