Did you know that some snakes die trying to eat themselves? For example, a rat snake was found dead, having swallowed 2/3 of its body. As crude of an analogy as it is, Turkish Airlines does more than starve itself by drastically reducing meal service: it actually eats itself alive.

First, let’s look at what you can expect on Turkish Airlines in terms of dining when flights resume next month.

On domestic flights and international flights under two hours, passengers in both business and economy class will receive a bottle of water. On flights between two and eight hours, business class passengers will receive a box containing: Additional drinks will be served and crackers will be offered on flights longer than five hours.

Economy class passengers will receive a picnic box with: On flights over five hours, a second picnic box will be served with a different sandwich and cake.

On longhaul flights over eight hours, business class passengers will still receive only cold meals. The first service will include

Additional drinks will be served. The second meal service will include a box with In economy class, the first service will include a box with The second service will include a picnic box with No coffee or tea will be available in either cabin. In business class, no glassware, menus, or towels will be used.

(H/T: One Mile at a Time via Flyertalk member ISTFlyer)

Turkish Airlines Once Had The Best Airline Catering

To understand the depth of the catering cuts, you must understand what catering was like before the cuts. In short: among the best in the business, if not the best.

Take a look at business class service on 633-mile flight from Beirut to Istanbul. Or the first meal service on my recent flight from Istanbul to Atlanta: 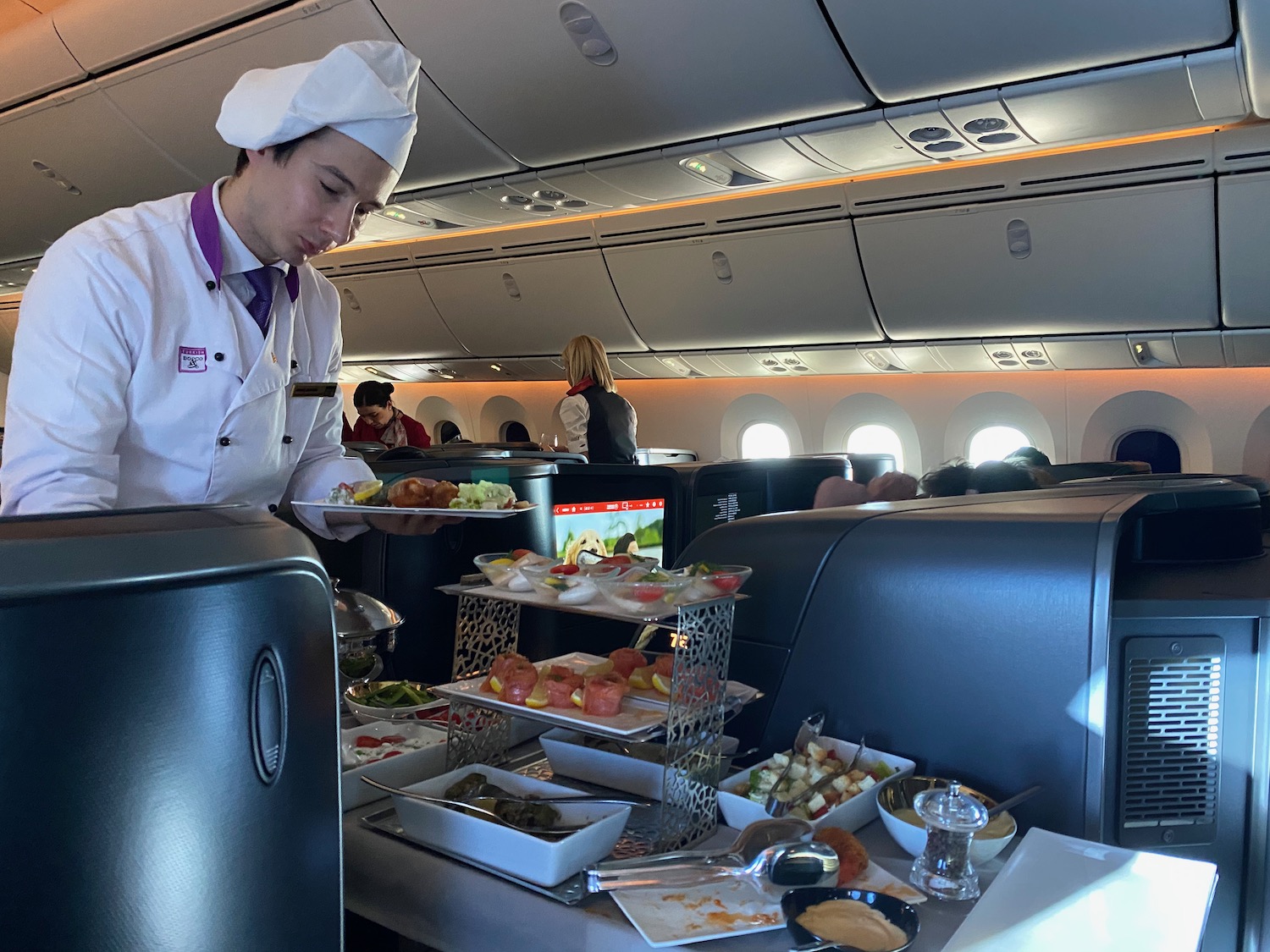 For many North American travelers heading to Europe, Turkish Airlines represented an inconvenient option since flying to western Europe via Istanbul requires so much backtracking. But the in-flight catering made it worthwhile. Dining on Turkish Airlines was such a treat; it set Turkish apart and made it one of my favorite airlines to fly. I know many Award Expert clients and blog readers feel the same way.

I’m going to be a bit of a contrarian here and argue that food still VERY MUCH matters, even during COVID-19. I get that revenue is way down, demand is way down, and airlines are balancing safety and sanitation concerns with soft product considerations.

But on a long flight, your body still gets hungry? How is a nicely-plated, hot meal more dangerous than a sandwich? If crewmembers wear gloves when serving and collecting the dishes, where is the unacceptable threat?

This new meal service policy is a vast overreaction that goes far beyond the problem itself and represents a pathetic attempt to pinch pennies. Turkish Airlines is hardly alone in looking for ways to preserve revenue, but it’s draconian meal cuts certainly place it in an unfortunate position.

These are “temporary” measures. Perhaps by fall Turkish Airlines will return to its legacy meal service model. But I kind of doubt it at this point. I’d guess more like 1-2 years. And not only does take away all desire I have to fly Turkish Airlines, it also confirms my fears about the future of flying.