I’ve reviewed the 787-10 on United Airlines many times and don’t need to do so again. But I did want to provide a catering update for those wondering what food and drink you might expect if you are traveling in United Polaris Business Class this summer to Europe.

I traveled from Newark to Amsterdam on United, a 7-hour flight that leaves around dinnertime and arrives the following morning.

Each meal is served on a single tray with mixed nuts (cashews and almonds), a packaged bread roll, green salad with dressing, and dessert, which has been mango sorbet for several months.

United’s full drink menu is available, with choices including: Meals are served wrapped, with foil around the main entree and a plastic cover over the salad. The bread is also wrapped (and served cold). But the meals themselves have not changed. While they are not as visually appealing as before, they are still generally tasty.

The beef short ribs were tender and needed no sauce and the mustard mashed potatoes were tasty. 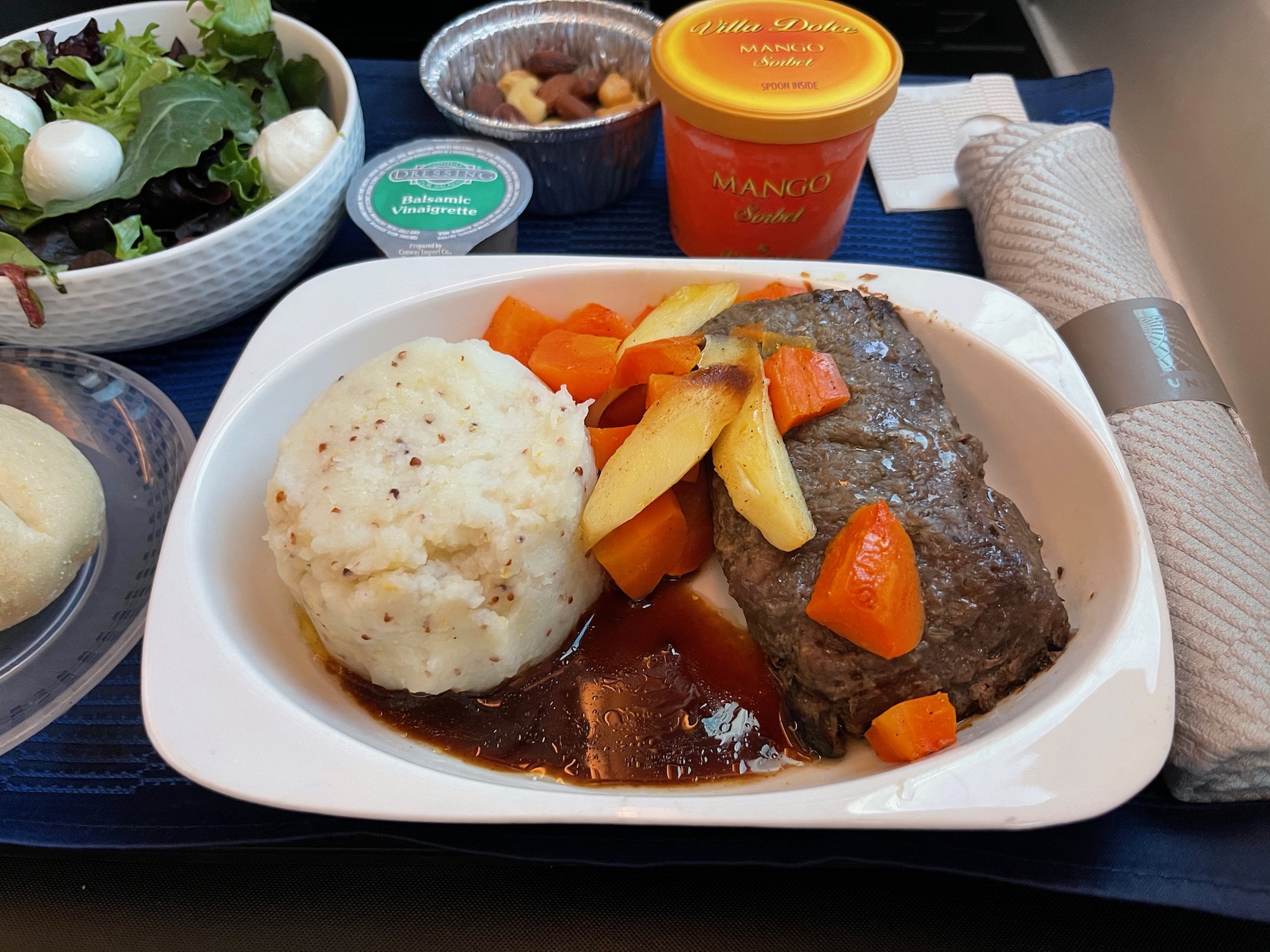 I’m generally hesitant to eat farmed salmon any more, but the salmon dish is one of my favorites and has a great coconut curry sauce that is good with both the fish and risotto. Be warned: the risotto has a nice spice to it, so avoid this if you cannot tolerate spicy food. Finally, the pasta dish is simple cheese and red sauce with vegetables, but always one of the safest things you can order. Prior to landing, hot breakfast is served. This month, that includes a choice of a kale and egg puff party with chicken sausage or steel cut oatmeal with agave apples and berries. Both are served with a packaged croissant, yogurt, and Dole fruit cup on the side. My menu was not unique to EWR-AMS but what you can expect on ALL international longhaul flights (marked as Polaris business class) departing the United States. Yes, whether you are going to Asia, Africa, South America, Australia, or Europe, United is currently offering the same menu in business class.

It changes each month and next month the three choices will be different, but generally you can always expect a beef, fish, and pasta dish when departing the United States. Special meals are currently not available, except for Kosher meals on flights to/from Israel.

When you return to the United States, each station may have a slight twist on meal service, but it is typically also three choices. For example, flying from London to Washington earlier this year the choices were beef, chicken, or pasta. 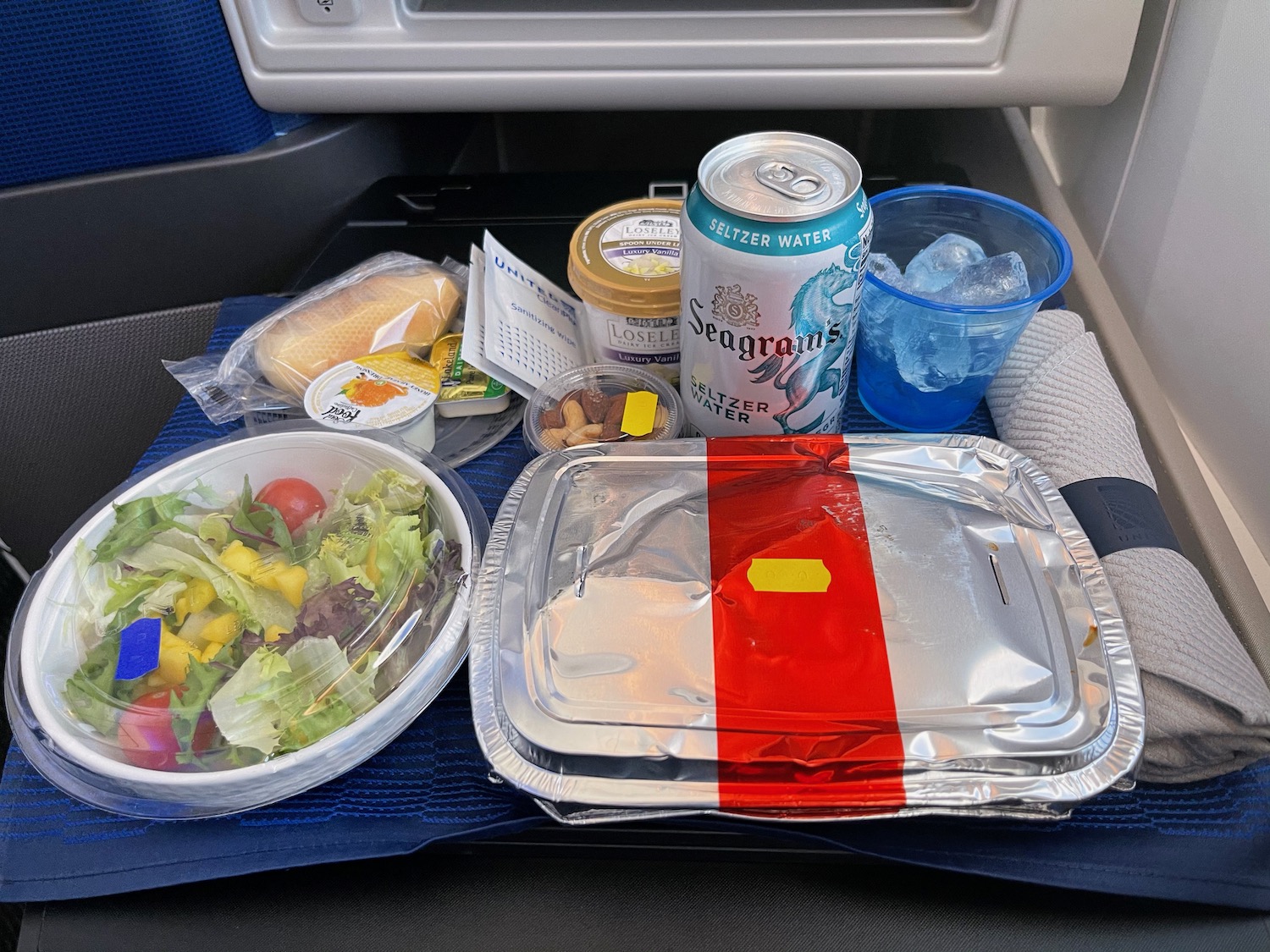 For the last few months, the pre-arrival meal on European flights has been a choice of vegetable couscous with pesto sauce or a hamburger Wellington. Breakfast is served on inbound flights from South America, Asia, Australia, and Africa. 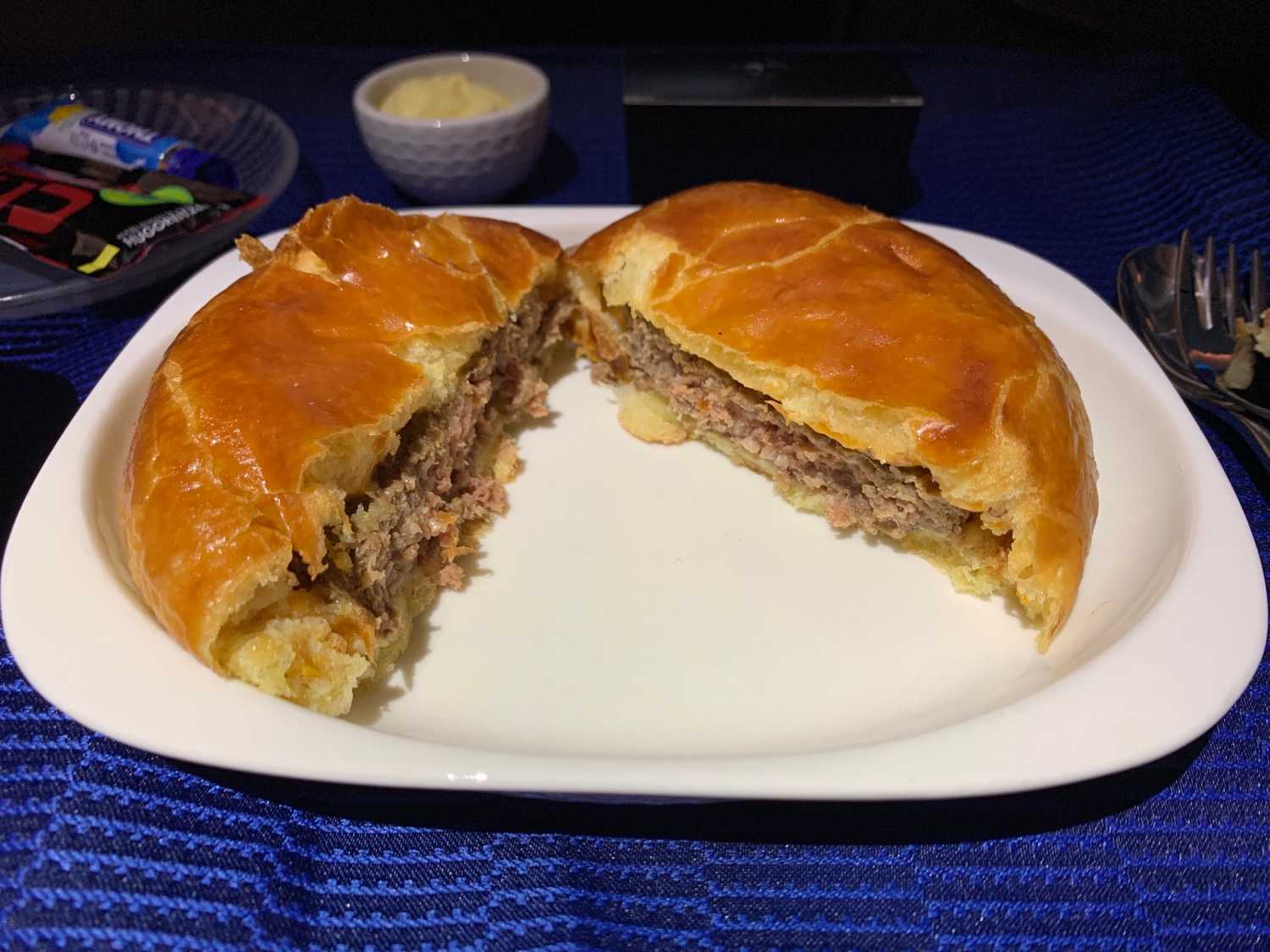 I’ve put this question to United several times and there is no answer right now, at least that United is willing to publicly provide. While I am confident more service will return to international flights (as it will on domestic flights in June 2021), I doubt it will happen this summer.

Flight loads will be up as Europe re-opens, but the current arrangement saves cost and minimizes crew contact…that will take some time to unwind.

My prediction is full meal service will return when Polaris Lounges re-open. I expect that will not happen till next spring.

You will never go hungry in United Airlines business class. While the food is not nicely presented, main courses and salads are the same as prior to the pandemic and you can still expect a full dinner and full breakfast even on flights from the East Coast to Europe.