I’ve written about all sorts of onboard mask incidents during the pandemic, but I finally witnessed an incident first-hand…a nutter onboard a recent flight from Denver to Los Angeles who repeatedly refused to wear his mask and cursed out a flight attendant.

I had settled into my seat when I first noticed the man in front of me was not wearing a mask. In these sorts of incidents I am happy to mind my own business and let the flight attendants handle it, but this was clearly not an oversight: he was deliberately not wearing his mask.

He began chatting with his seatmate, a guy who was properly wearing a KN95 mask and probably far too polite. I’m not going to repeat his exact language, for its was incredibly foul, but some of the topics he brought up:

At two points during the boarding process, he was told to put his mask on and briefly did, before taking it right off once the flight attendants retreated to the galley. During this time the man shared his opinions with his seatmate on a wide range of issues, some of which I captured below from my seat behind them:

Finally, the door closed and one of the flight attendants performed a last check of the cabin to ensure that seatbelts were securely fastened. Once again, the man had his mask pulled down below his chin.

And then the famous last words from the FA:

“Are we going to have a problem today?”

The man looked back at the flight attendant, pulled the mask up, and shook his head no. After the flight attendant walked away the mask came off again and the man returned to his imbecilic diatribe…with his mask off.

He revealed to his seatmate he had just been thrown off a Southwest Airlines flight for not wearing a mask, walked over to the United counter, and booked the last first class ticket on our flight to Los Angeles.

That sort of admission sort of makes me re-think Delta’s proposal to share a “naughty” list amongst U.S. airlines…

> Read More: Delta Wants To Collude With Other Airlines To Ban “Bad” Passengers

Trouble In the Air

Once we reached our cruising altitude, another flight attendant came around the cabin to take drink and dinner orders. The man wanted hard liquor and the flight attendant, after reminding him to pull his mask up, refused.

“Sir, you’ve had enough for now. We’ll check again in an hour or so.”

This enraged the man. He leaned over to his seatmate and said:

“Bitches. They’re all bitches. They don’t like alpha males. She doesn’t like me because I’m a strong white male.”

Keep in mind that during this time the flight attendant, a black woman, was standing in the aisle. 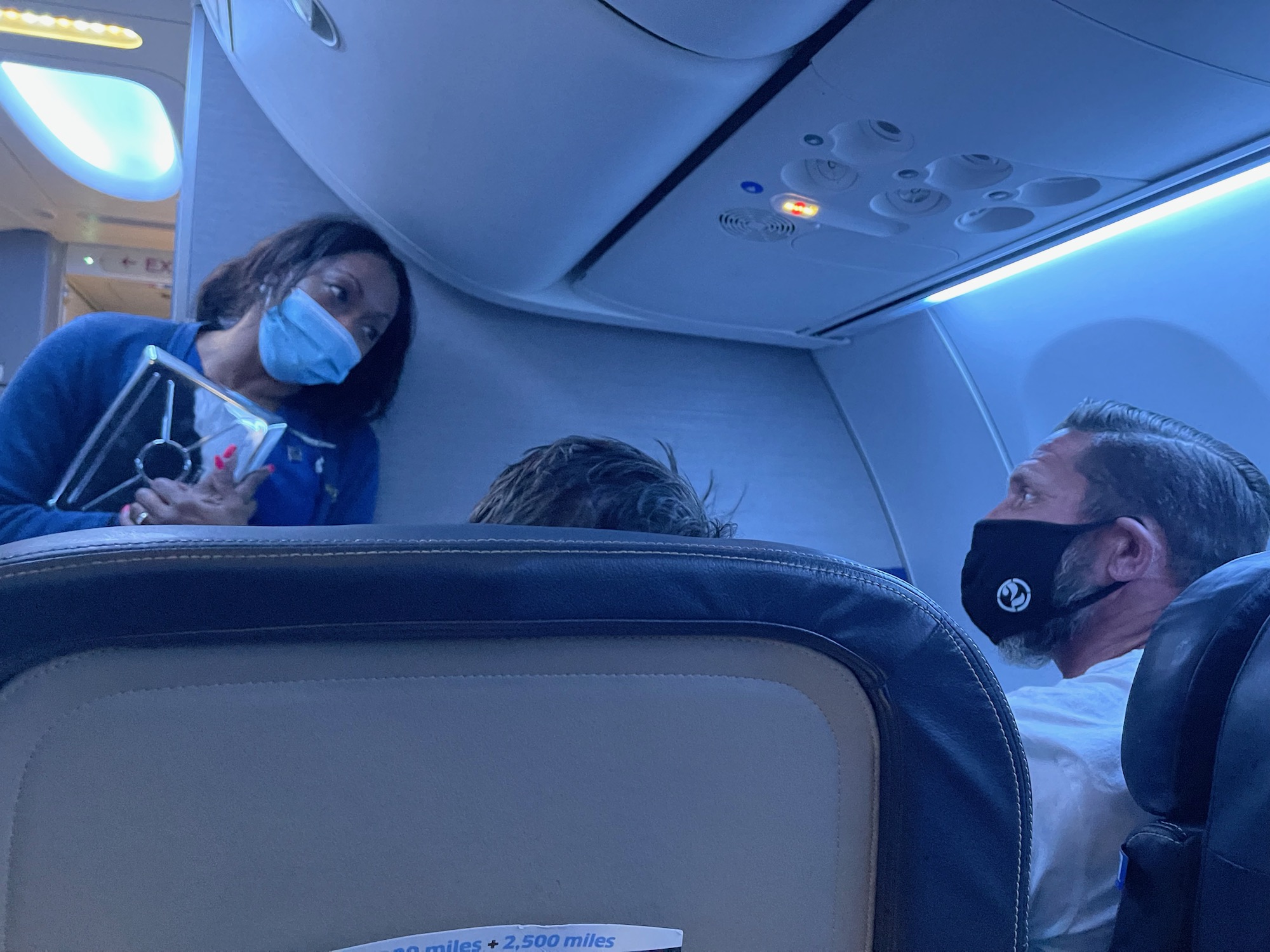 In an amazing display of professionalism, she kept her composure and asked what he would like for dinner. He ordered chicken and water.

She returned with his meal and he pulled his mask off and began eating.

Over the next hour, he spent most of his time talking to his seatmate (same stuff…). Twice he was told to put his mask on between bites and sips, especially because there was so much gap between them, but he responded by holding up his cup, to signify he was drinking. There was no verbal acknowledgement.

He appeared to have sobered up a bit after an hour, because when the flight attendant returned to collect his meal tray, he apologized for cursing her out.

Still, that did not stop him from failing to wear a mask for most of the reminder of the flight.

No Way I’m Speaking Up

I realize that taking pictures and video and later writing about it instead of speaking up may be construed as passive aggressive, but even though this guy was a head shorter than me, I was in no mood for confrontation. He was quite combative and the last thing I needed was an invitation to duel.

That was especially wise because I ran into him puffing on an e-cigarette (still talking to his poor seatmate who needs to grow a pair and tell people to shut up when they bother him) on the road to the Uber parking lot at LAX. The mask policy is not my policy to enforce and it is not for me to correct unruly passengers. But I was tempted. The sad twist of this story is that there is was a little five-year-old boy, the same age as my son, seated behind me. He heard everything too. No child should be forced to endure that level of profanity.

The flight attendants on this flight deserve great kudos for their patience. Can you imagine being cursed at and taking it with grace and dignity? I believe that we would have diverted on other airlines and I’m thankful we did not return to Denver or wind up in Las Vegas or somewhere in-between DEN and LAX.

Whether this passenger was simply drunk or truly believed all the venom he was spouting (plus the filthy language), is beside the point. Talking to a flight attendant in the manner in which he did should land him on United’s banned traveler list. I hope these pictures and videos will be helpful in holding him accountable.