I chose to fly United Airlines home from Queen Elizabeth’s Platinum Jubilee so that I could taste the new menu rolled out this month in Polaris Business Class. While the presentation and dessert choices represent a nice improvement, the new salad is strange and there was something fishy about my main course.

Upgrades have been tough lately at United Airlines, but with the arduous pre-departure COVID-19 test still required on all inbound flights to the USA, flights from UK and Europe to the USA have been slightly less crowded than traveling in the other direction. I booked five days prior to my flight when I noticed the nonstop United flight from London to LA had confirmed upgrade space (“PZ” class) available. I used 40 PlusPoints to secure the upgrade immediately after booking.

I was quite excited to try United’s refreshed menu and expanded dessert options in business class, which rolled out on June 1st. Prior to the flight, though, I enjoyed some really delicious roasted chicken (with honey, thyme, and mustard) and cottage pie in the United Club. I had not eaten in eight hours and was famished…it was wise that I had a snack before my meal onboard. 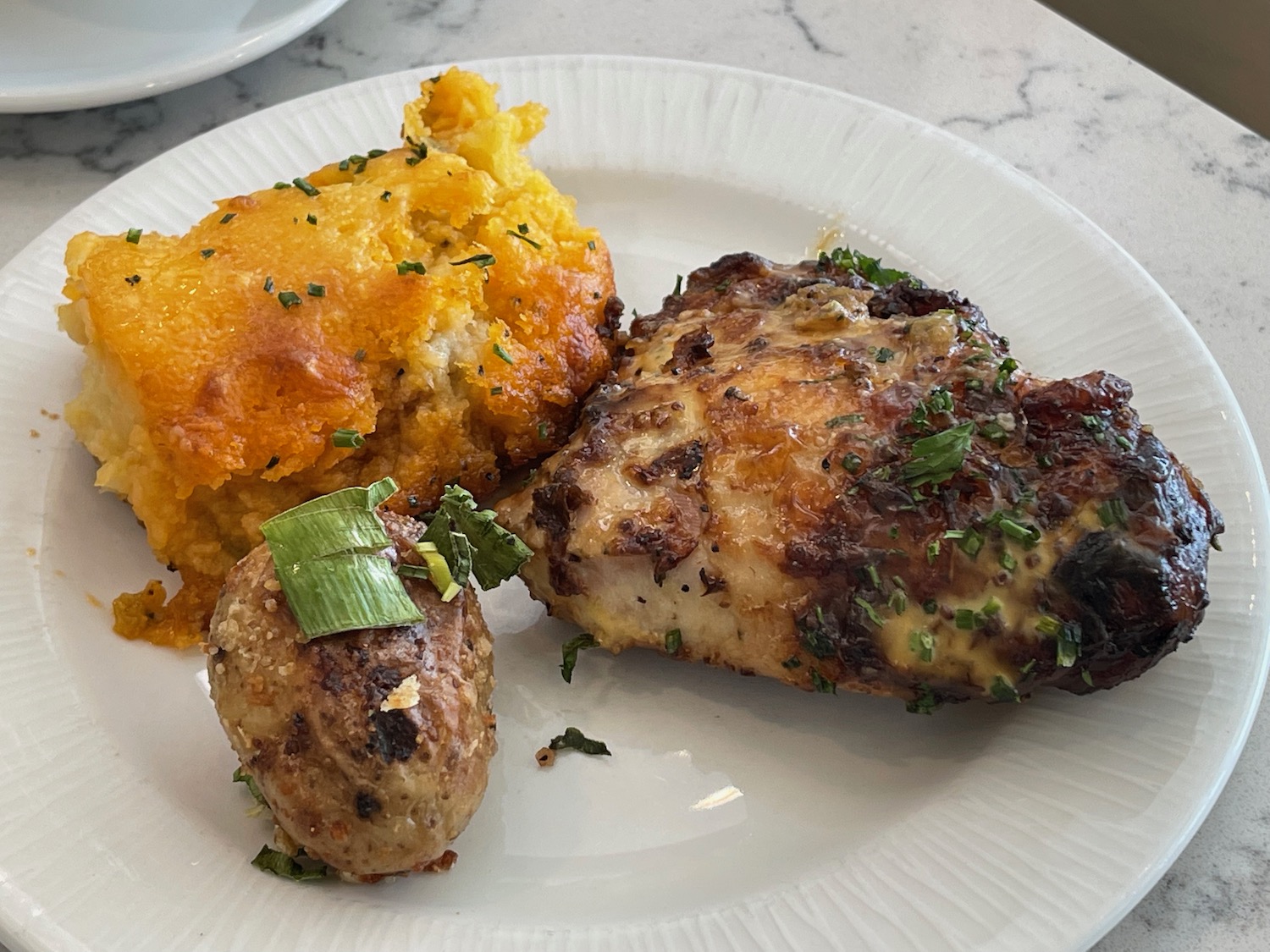 Table cloths were laid after takeoff, which mark another step in United’s slow return to pre-pandemic service. Warmed mixed nuts were offered along with a choice of beverage. United still has not brought back lemon or lime wedges, but I came prepared with a supply from the lounge, prompting a hearty laugh from the flight attendant. 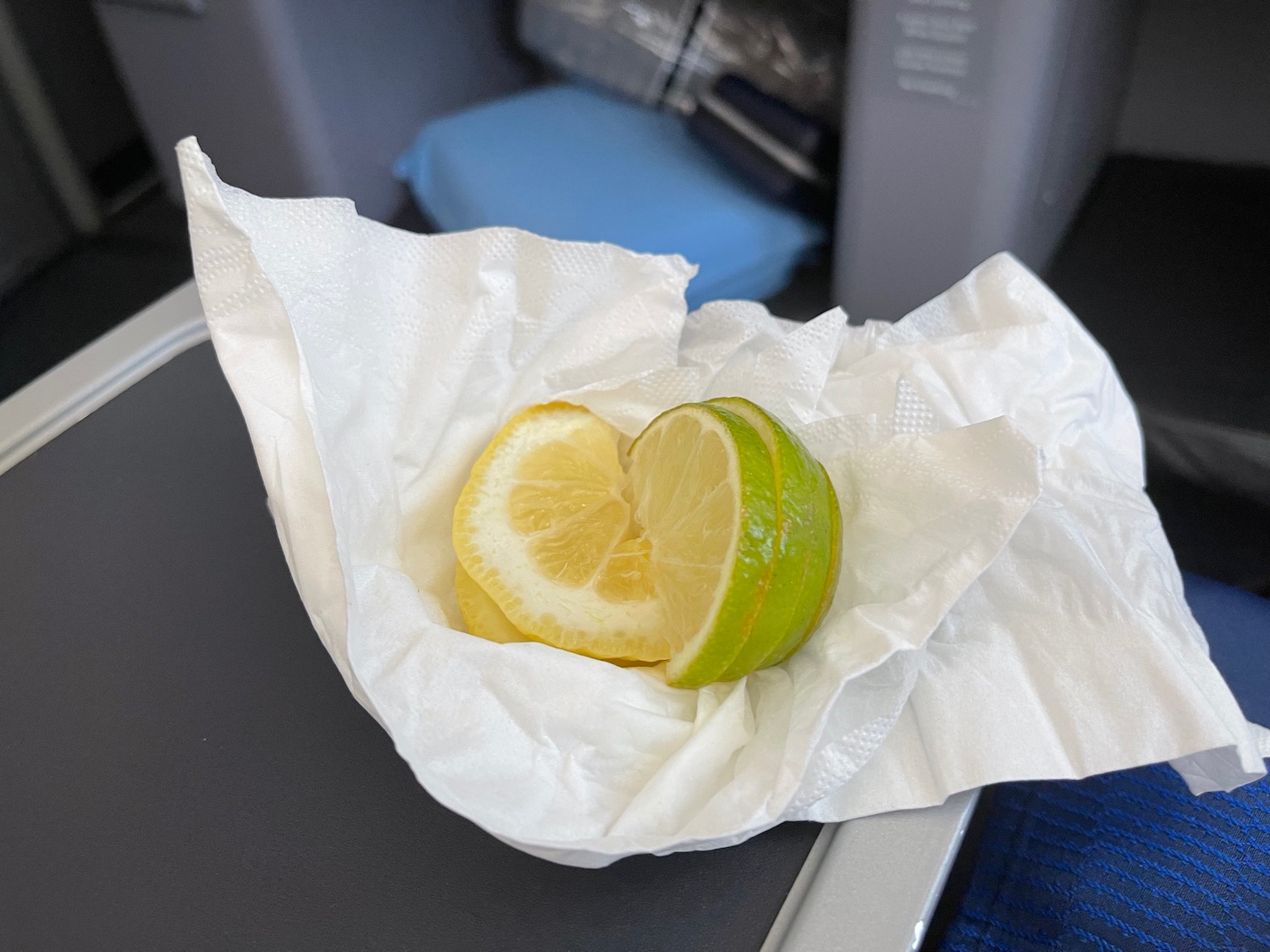 Printed menus were not boarded. Instead, prior to takeoff the purser welcomed passengers onboard then took their dinner orders. Choices included:

It’s nice to see four choices back and a deviation, if ever-so-slight, from the same choices we’ve seen for years.

I love halibut and fennel, so the choice was easy for me. The meal arrived about an hour after takeoff and I give kudos to United for the improved presentation. Finally, it looks like a premium cabin meal again… 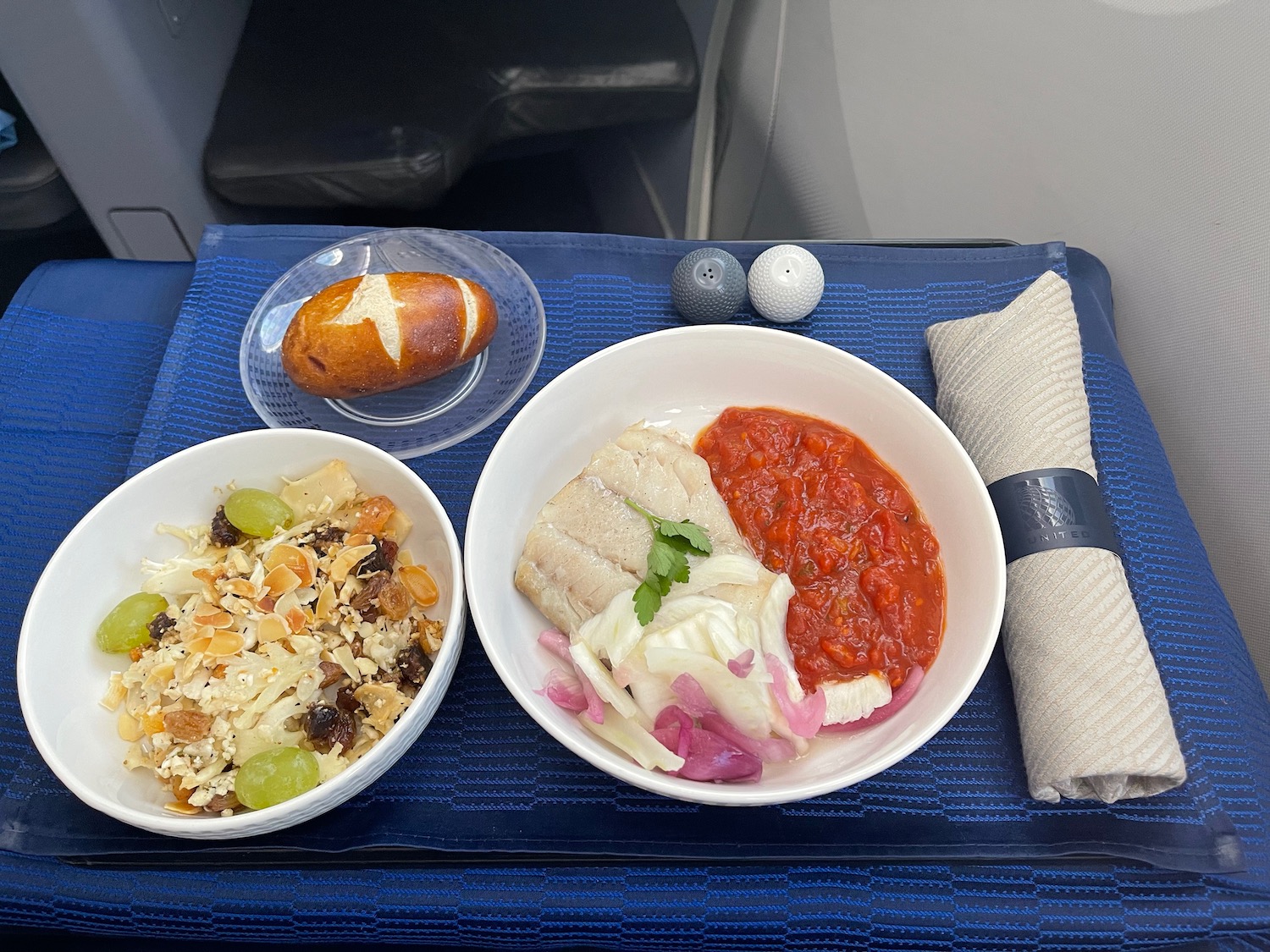 That said, I was dismayed that the green salad has been replaced with a roasted cauliflower and fruit salad with almonds, dates, sultanas, apricots, and grapes. It wasn’t bad (though looks like bird food), but I greatly prefer a green salad. The pretzel roll was served warm. 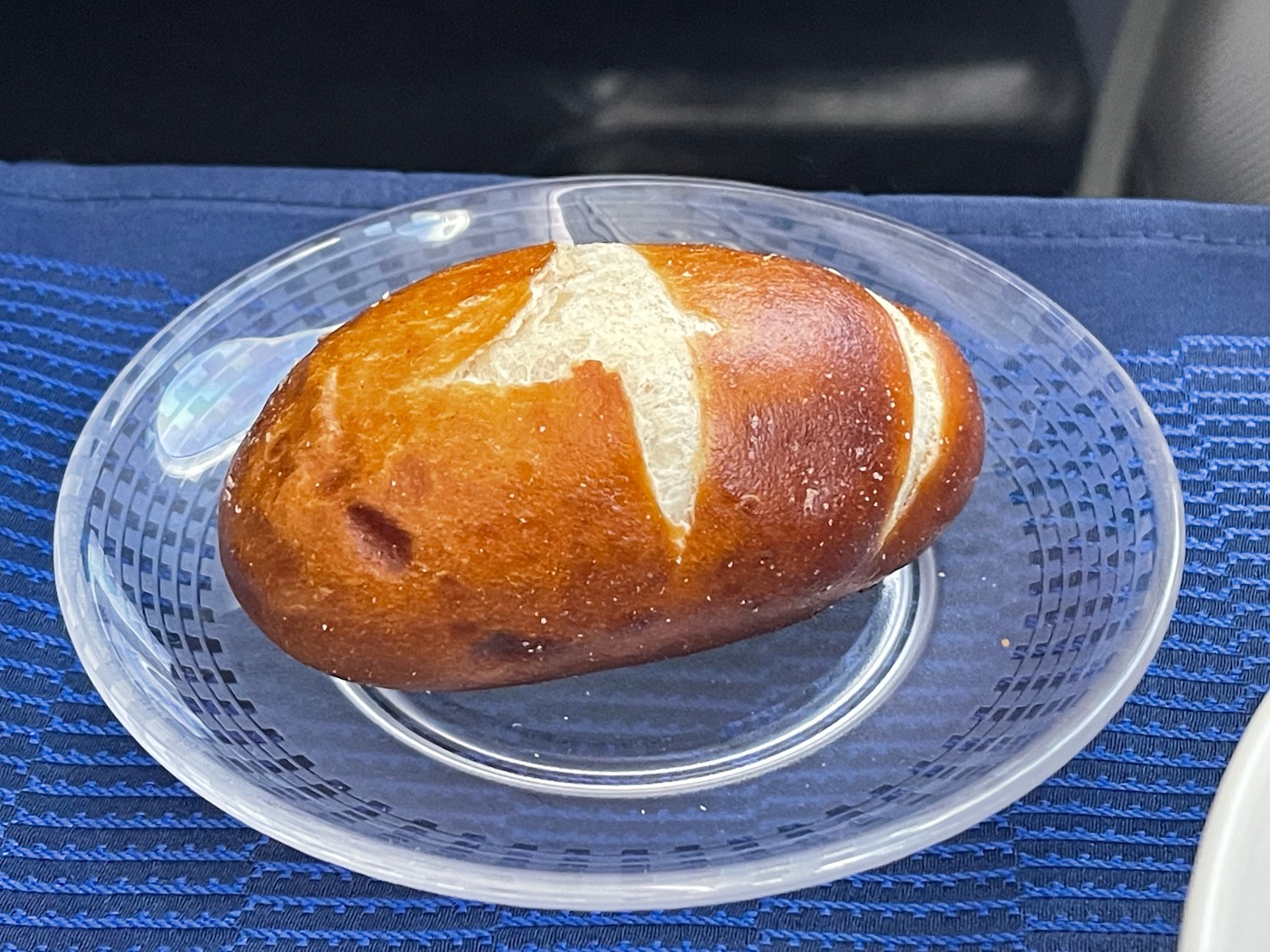 As for the main course, I’ve had far better halibut. The fish smelled fishy, which is an imperfect way of saying that it was passable, but not great halibut. I’ve also had far better arrabbiata sauce and found the fennel to be rather tough. 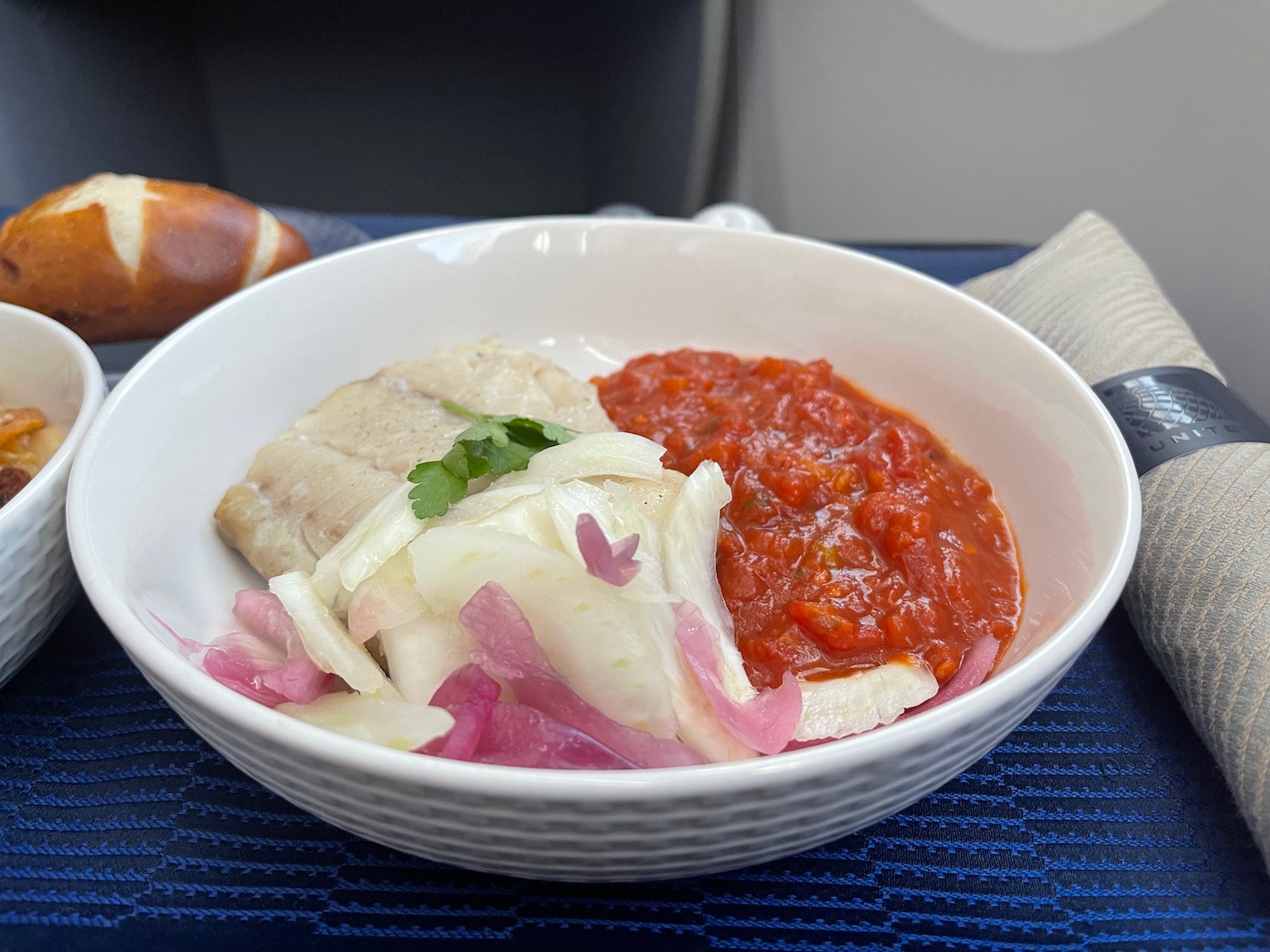 Dessert was a highlight of the meal and also a disappointment at the same time, unless my flight was an anomaly. Prior to the pandemic, you could have one or you could have all three. I requested all three, but was told that I could only have one. I chose the ice cream and found it to be delicious, with a strong flavor of vanilla beans. It was still hungry, though, but decided just to take a nap.

When I woke up, I saw that a snack basket with packaged treats were available in the front of the cabin: 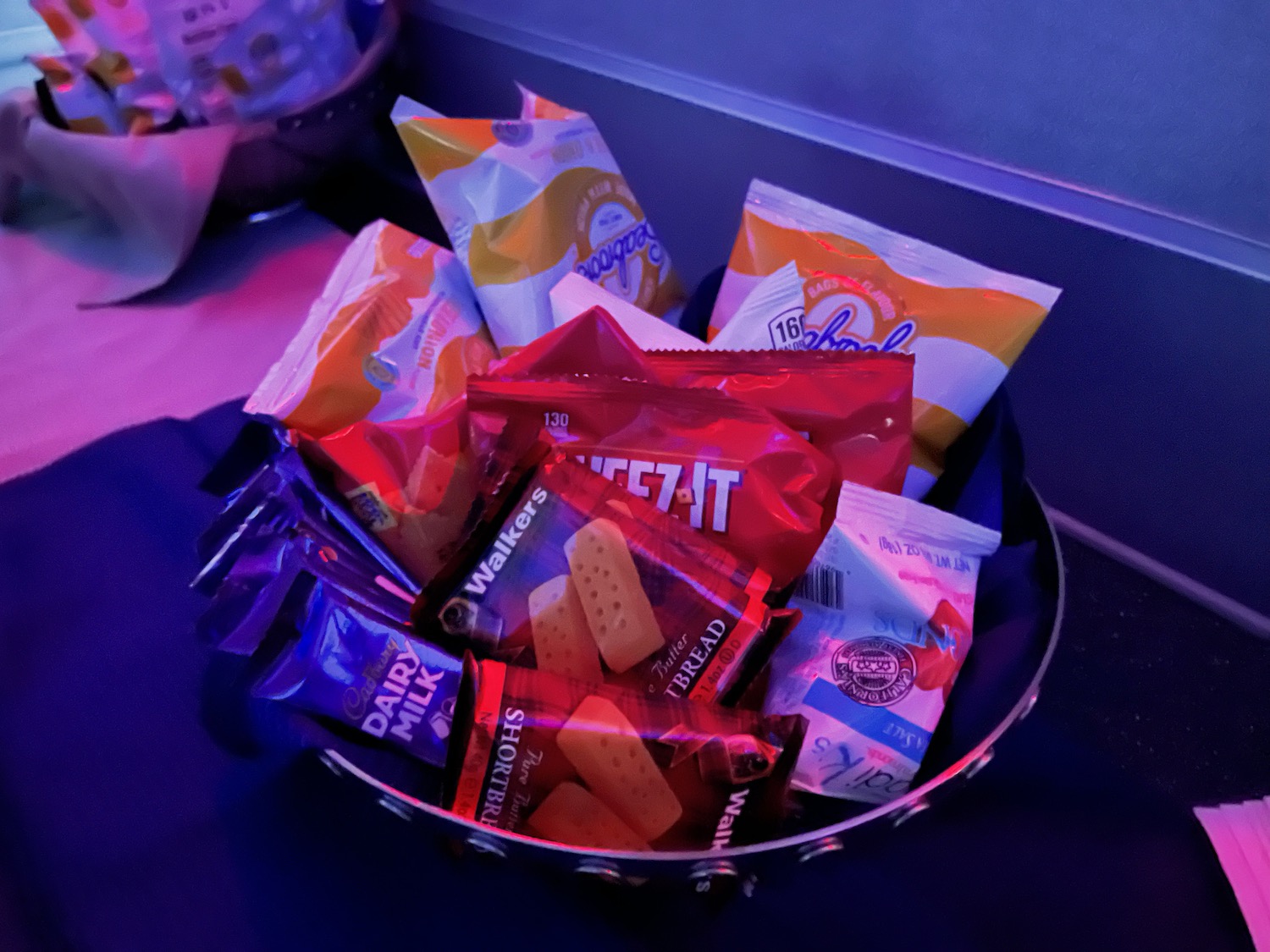 I got up to use the lavatory and found another cart in the mid-cabin galley and there I spied that raspberry tart I wanted earlier. I had a cup of coffee with it and found it very good – not too sweet and yet still rich. Hopefully United will board plenty of extra desserts so that more peckish passengers can enjoy a couple items.

Prior to landing, I was offered a choice of vegetables with couscous and pesto sauce or a cheeseburger. I chose the vegetables and found the dish quite satisfying (Served with ripe fruit and a packaged cookie, which I did not touch). However, after finishing I was still hungry and asked if I might have a cheeseburger. This time, my request was happily obliged. I did not order the cheeseburger initially because I had been warned on FlyerTalk it was a “grayburger” but I thought it was tremendous (and allowed me to start fasting several hours early since I didn’t need anything more to eat at home) so it was a win-win. Overall, United’s updated international meal service is moving in the right direction. Perhaps I just chose the wrong main course, as others seemed to enjoy their chicken or beef. One thing I’d like to see sooner rather than later is a return to a green salad, as blasé as that may be. The new dessert options represent a great improvement, but I hope United provisions enough for everyone to have more than one, if they are hungry. It would still be great to see the full ice cream sundae service return. Finally, if you are flying from London Heathrow the lounge food at the United Club is excellent (and you also have Lufthansa, Air Canada, and Singapore Airlines lounges nearby, all of which offer unique food and beverage options).