Nearly four years ago, my son Augustine offered a “review” of his first flight, a United 787-9 from Los Angeles to London. In the spirit of equality, my daughter Claire Marie will offer her own “impressions” of my recently-reviewed Lufthansa A350 flight from Los Angeles to Frankfurt in business class, her very first flight. Hopefully at least one of them will be willing to take over for me one day on Live and Let’s Fly…

Hello world. My name is Claire Marie and my Daddy writes this blog. While he may be the doyen of airline reviews, this blog truly lacks a female perspective. That’s where I come in.

When my parents decided at the last-minute to head to Germany so that I could meet my grandparents for the first time, my father faced a difficile choice: take the logical nonstop flight on Lufthansa or torture us with a connection via San Francisco on United.

Now even at the tender age of eight months, I’m all for status and its accompanying regalia. But time is both money and the currency of love…and I need more of both. Mercifully, Daddy came to his senses and booked us on the nonstop using these things called points. I just thought that is what Mama does to me when she wants me to listen to her but apparently it is also a noun.

Check-in was an indignity in Los Angeles. They questioned whether Daddy was allowed into Germany, but I saved the day. Brandishing my birth certificate and newly-minted German passport (with minimal assistance from Daddy), I let the check-in staff know that the silly American was traveling with me.

Daddy said we could use me to board first. Although I object to using my grace and charm for such vain avarice as pre-boarding, I was cajoled into silence on the breast of Mama.

We walked onto this cylindrical tube with chairs onboard and made our way to the front. Daddy was taking pictures like a halfwit, embarrassing me as the flight attendants looked on in bemusement. Mama says this tomfoolery puts bread on the table, but Jesus said, “Man shall not live by bread alone.”

A flight attendant knelt down beside me and presented me with a stuffed airplane. I may have picked it up and stuffed it into my mouth, but what I meant to say was, “No thank you, I’m a minimalist (unlike my Daddy).” 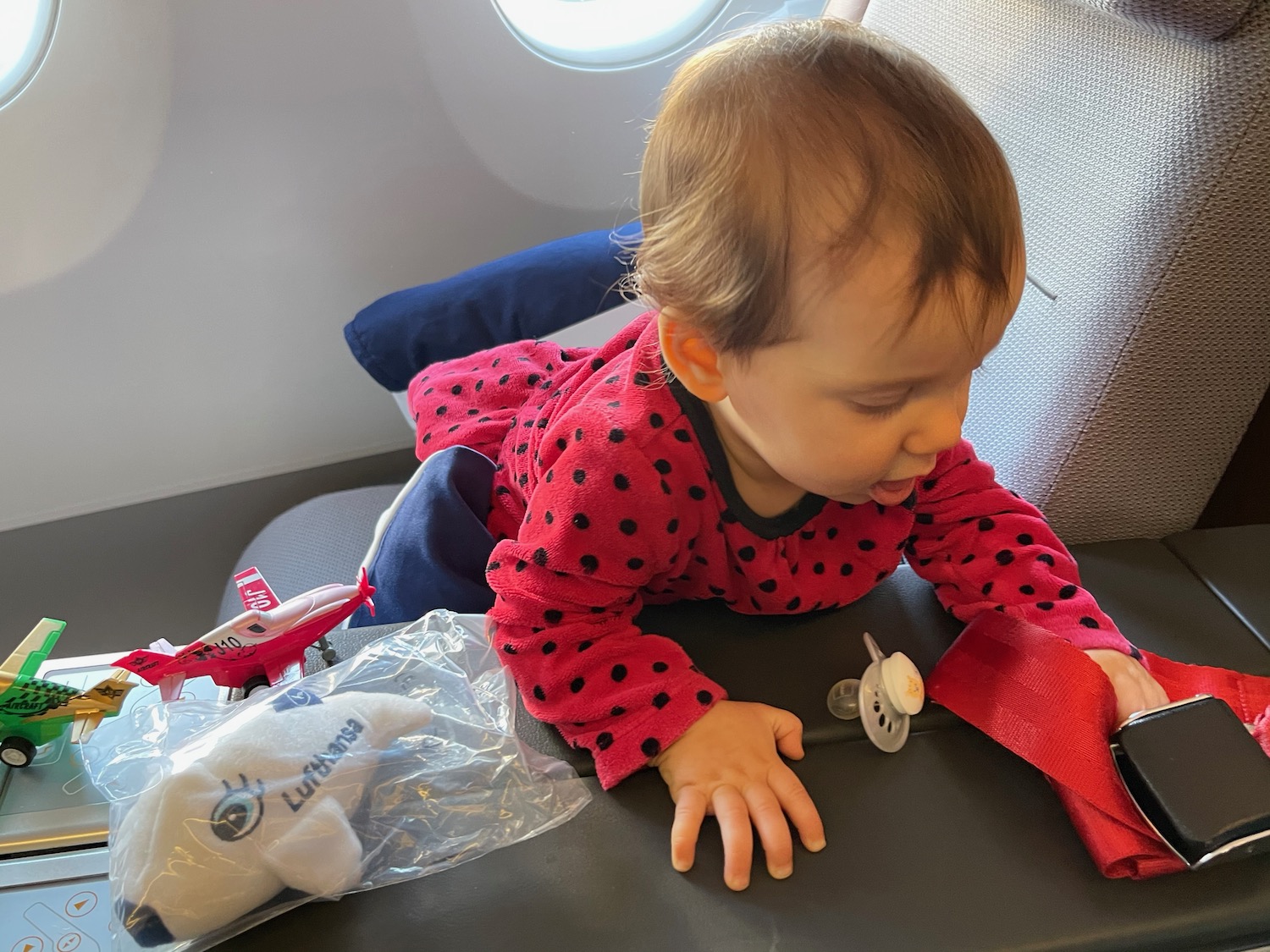 That pestiferous bother of mine, Augustine, was diverting Daddy’s attention from his little girl so I expressed my disapproval by pulling on his hair. He let out a scream and retreated to Mama, who was snickering from row two. I then took his toy airplane. Call me the Lady in Red, but don’t call me a ladybug.

I’m weeks away from walking (months earlier than my brother, I must emphasize) and have a lot of trouble sitting still. Sitting is not intellectually stimulating when I am not sitting in my library and immersing myself in hermeneutical soteriology or Kantian metaphysics. I’d rather climb.

So I proceeded to climb over the seat and nearly made it to Mama before Daddy pulled me back and strapped me to himself with this contraption he called a Sicherheitsgurt (when Daddy prefers the German word over the English word, he just uses it. You can imagine the confusion that creates for me trying to immerse myself in both languages, but I digress…). 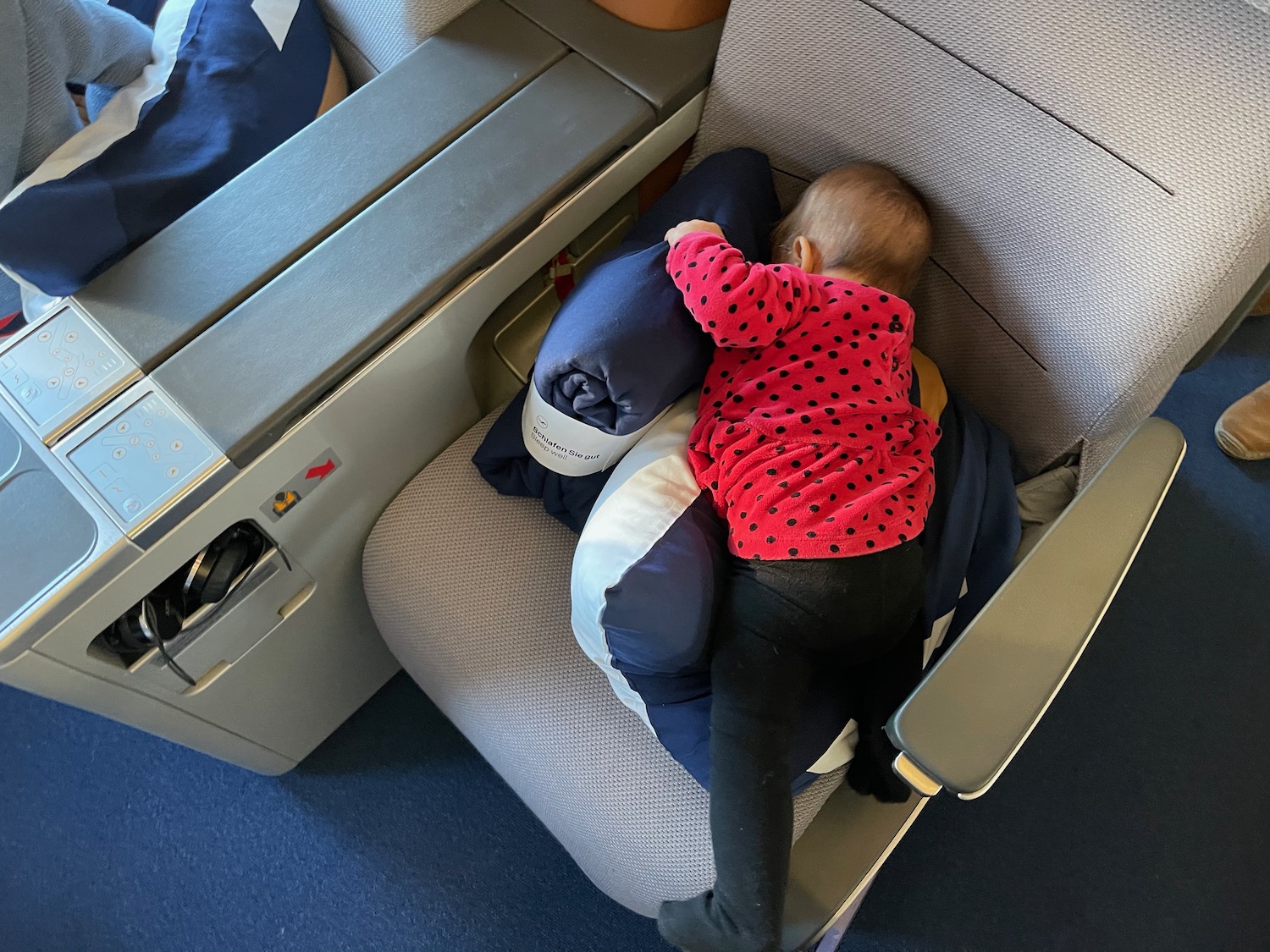 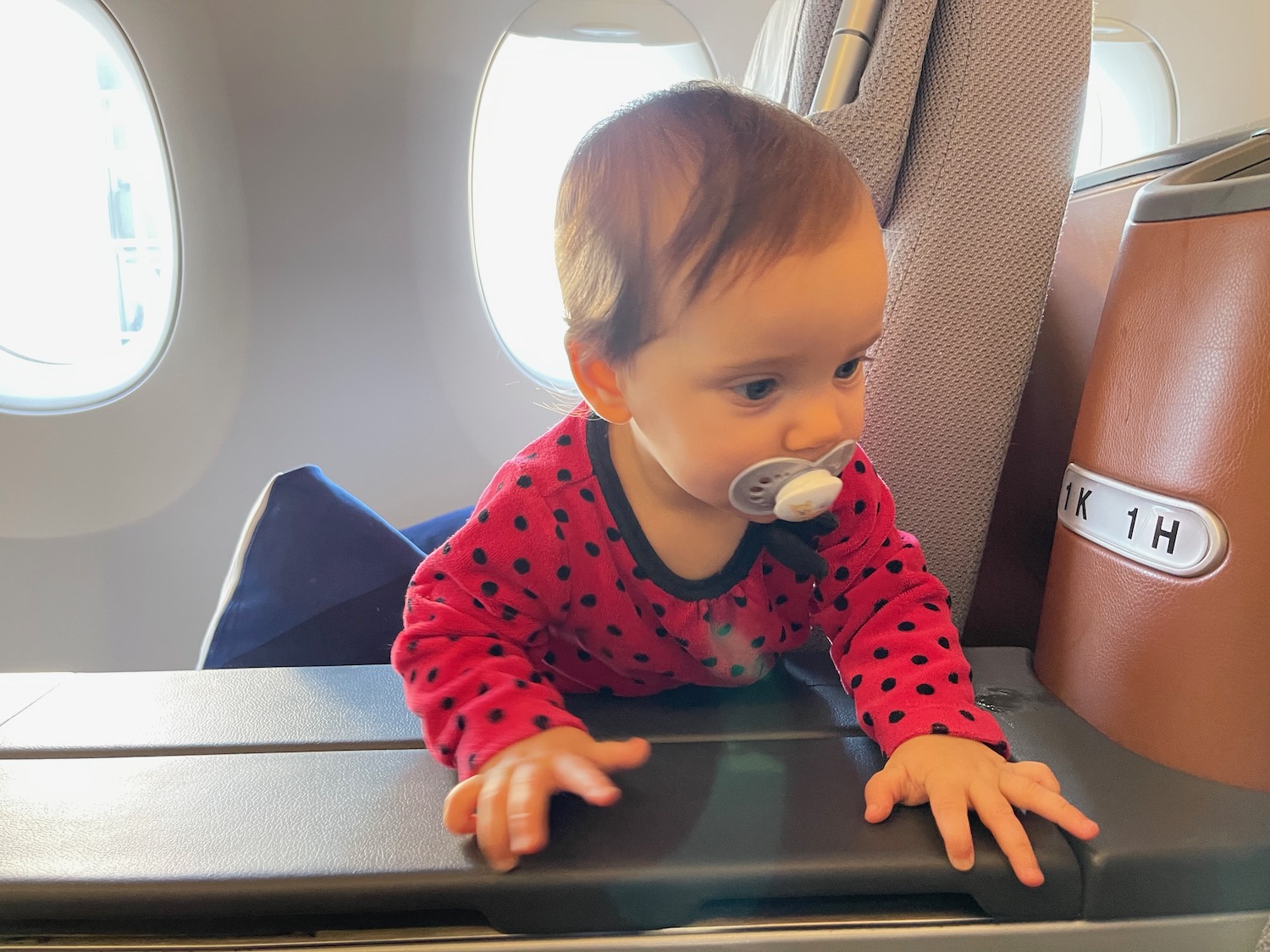 We took off, which was such a peculiar phenomenon. From my vantage point, I watched us turn over the Pacific Ocean before leaning back and resting.

A flight attendant appeared. She was talking about me. Something about a bassinet, a French term perhaps?

She proceeded to set up this little bed on the wall of the plane. I looked at it and shook my head. This would never do.

Mama and Daddy took turns holding me, then tried to put me in that dastardly little thing.

I was having none of that and popped up like Whac-A-Mole every time they tried to get me to lay down. It quickly became clear that the bassinet was inutile and I retreated to my own seat in row two (thank you coronavirus for the empty flight). 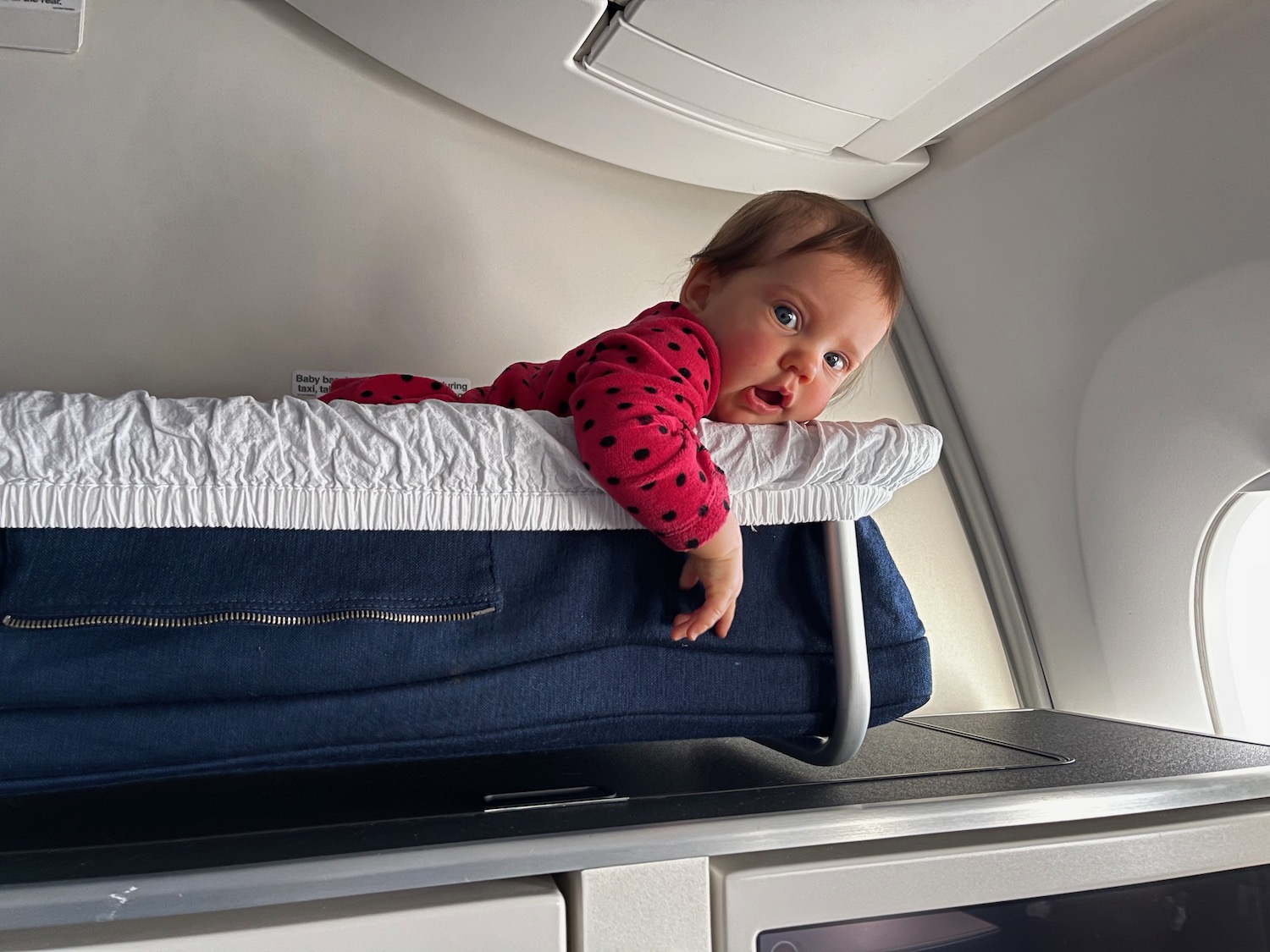 Daddy still doesn’t have his smell back from being a fool and catching COVID-19 (naturally, I didn’t), so he changed my diaper and got me ready for bed.

And then I slept.

For about seven hours.

While I greatly prefer my own crib, this crib lacked walls and thus felt more spacious. I wrapped myself in the mattress pad (the cabin was dreadfully hot and far too warm for that wretched duvet) and was soon dreaming of when I’d be old enough to run for the U.S. Senate. About an hour prior to landing, I woke up. Actually, Mama woke me up stirring her coffee. I’m more of a tea person myself, but just stuck to milk this morning.

A flight attendant appeared and offered O’Saft (another word my father prefers over the English equivalent). She then knelt down and offered me some vegetable lasagna.

My eyes lit up and I mused whether Lufthansa’s version would measure up to the Gordon Ramsay recipe I use it at home.

I was quickly disheartened to see that my breakfast arrived in a glass bottle. While I did eat it, I can assure you it was only to be polite. 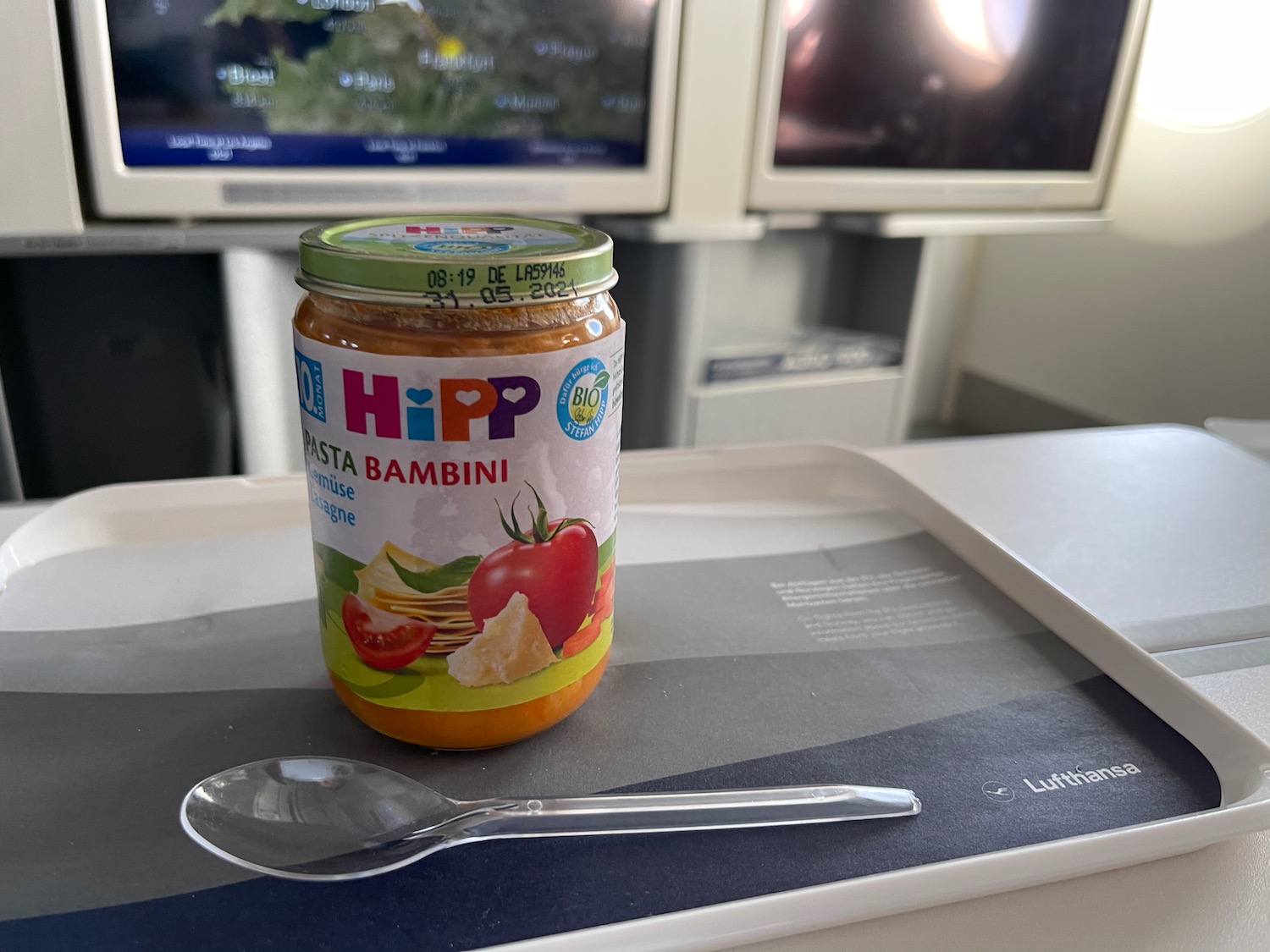 We landed in Deutschland and bid the crew Auf Wiedersehen, who fawned over me as if I was a prima donna just because I slept through most of the flight. I must admit I was a smidgen offended that my parents took the credit for me being so quiet. I’d show them on the return trip…

Speaking of prima donnas, I was kept waiting for over 20 minutes on the jetbridge for my royal carriage and gave the ground crew a piece of my mind when it finally appeared. Do Star Alliance Priority tags mean nothing these days?!

Overall, however, it was a pulchritudinous flight and I was happy to arrive in a jocund state and well-rested.

To my fellow babies, what was your first flight experience like?