While United Airlines’ soft product still has not returned to pre-pandemic levels, I enjoyed a comfortable flight with 10 hours of solid sleep from Newark to Johannesburg onboard a 787-9 in Polaris business class.

This trip report is bit different than my usual format because I have reviewed United’s 787-9 so often…most recently here. Rather than focus on the nuances of the soft and hard product, I’m offering a shorter report of my journey which should still give you a good idea of what to expect onboard a United Airlines longhaul flight in 2022.

We ran into a catering delay at the gate in Newark, which delayed boarding by 45 minutes. Even so, the captain announced we would arrive ahead of schedule due to favorable tailwinds. The flight is normally blocked at 14hr, 35min (including taxi time on the ground) but actual flight time on my journey was under 13 hours. Go for row one or row nine if you can on United’s 787-9. Those are bulkhead rows and consequently have a much wider cutout for your feet: 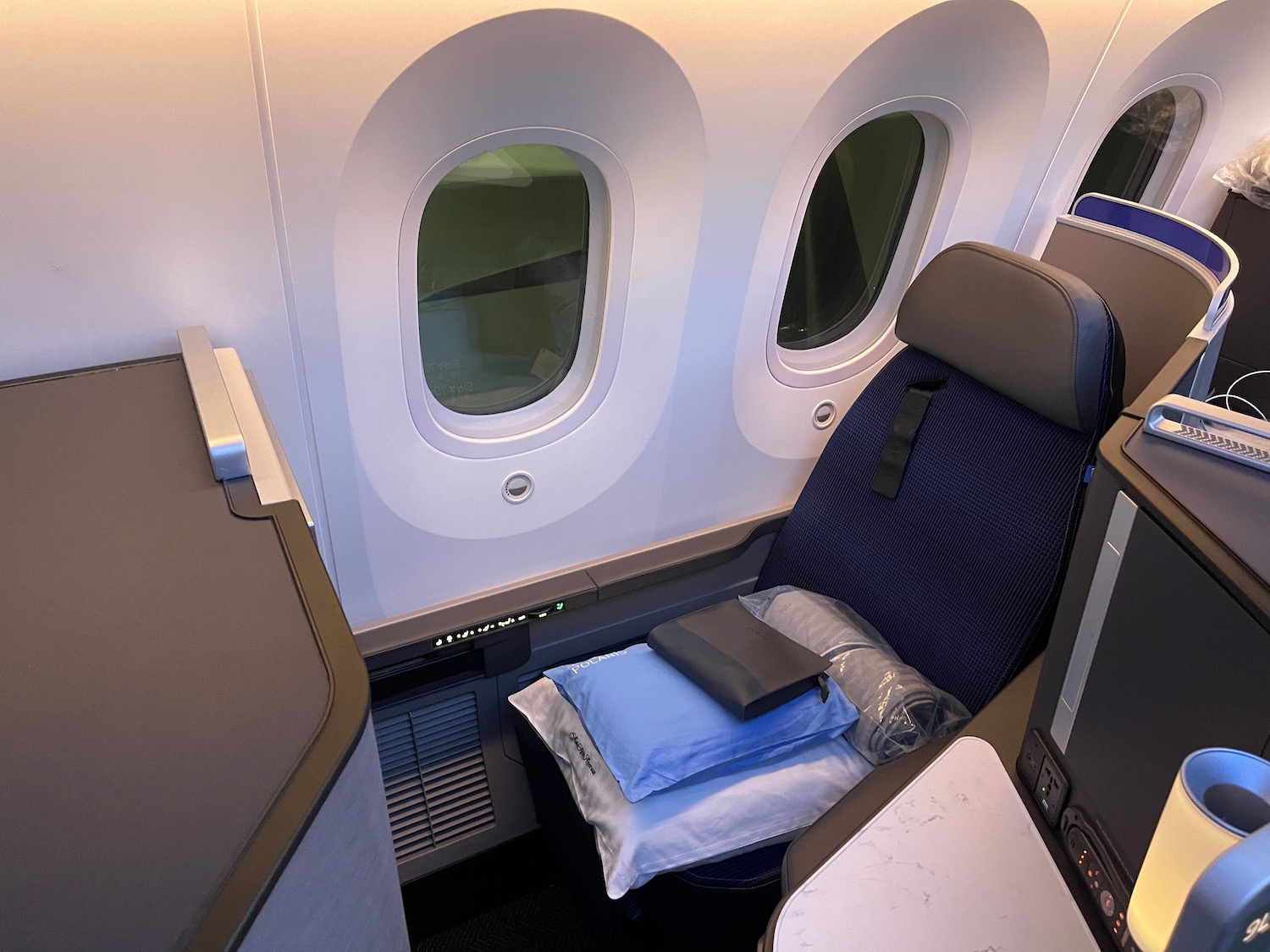 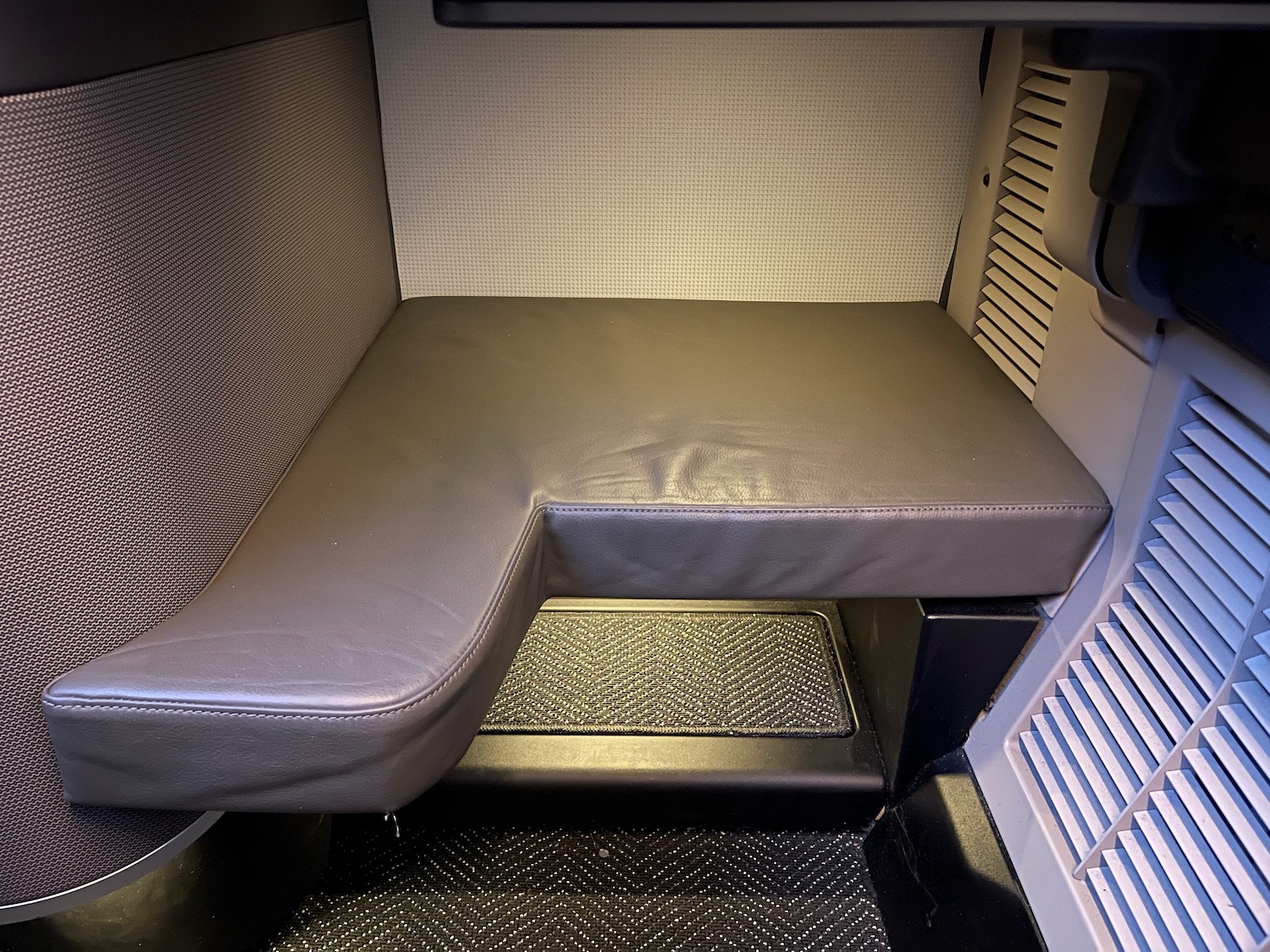 It’s not that the other seats are bad (they are just fine), but bulkhead seats have even more room to spread out.

On each seat was a: United’s bedding remains best in the business (the duvet is the perfect weight, keeping you warm but not smothering you). Mattress pads are available upon request and I always request one – it makes for an even better rest.

I did not open the amenity kit – why waste it, I thought? United has a new faux-leather case, but the contents are the same (eye shade, ear plugs, toothbrush, toothpaste, socks, pen, and Sunday Riley toiletries) I was also offered pajamas, which United only offers on flights over 12 hours. I chose L/XL, which was a mistake…they were HUGE (especially the pants). I should have realized this wasn’t ANA! 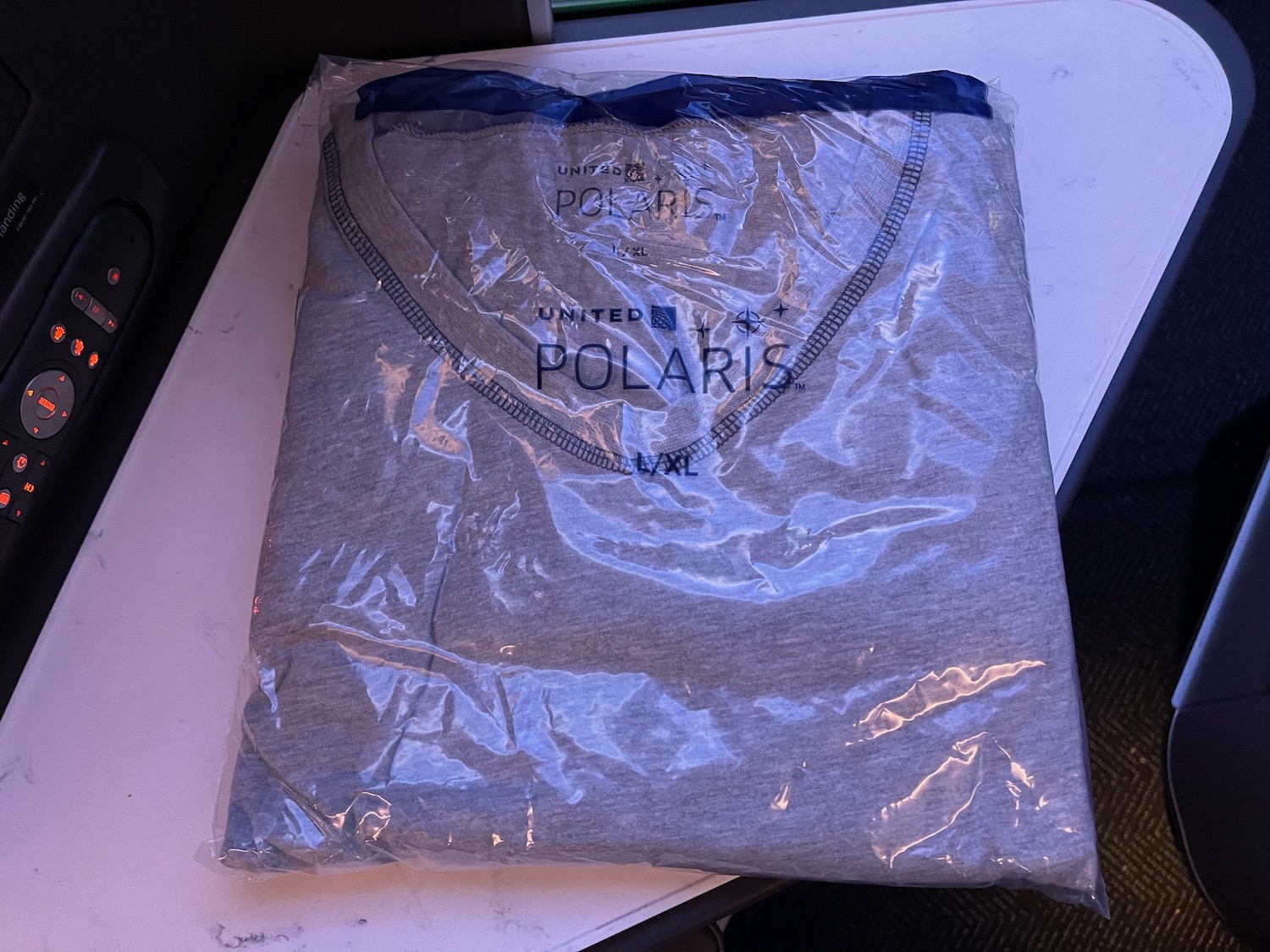 The flight crew, at least working business class, was all male and laid back, but still professional and friendly. The purser, Jules, welcomed me onboard and his colleague took my meal order after I had a few moments to settle down. They were attentive during the short time I was awake at the start and end of the flight.

United still has not brought back paper menus (and really doesn’t have to if it could just find a way to display them on united.com and on the in-flight-entertainment screen onboard), but I was offered a choice between three meals:

I chose chicken, which is a dish I had not seen before on a United longhaul flight.

Just 30 minutes after takeoff, the entire meal was served on a single tray: 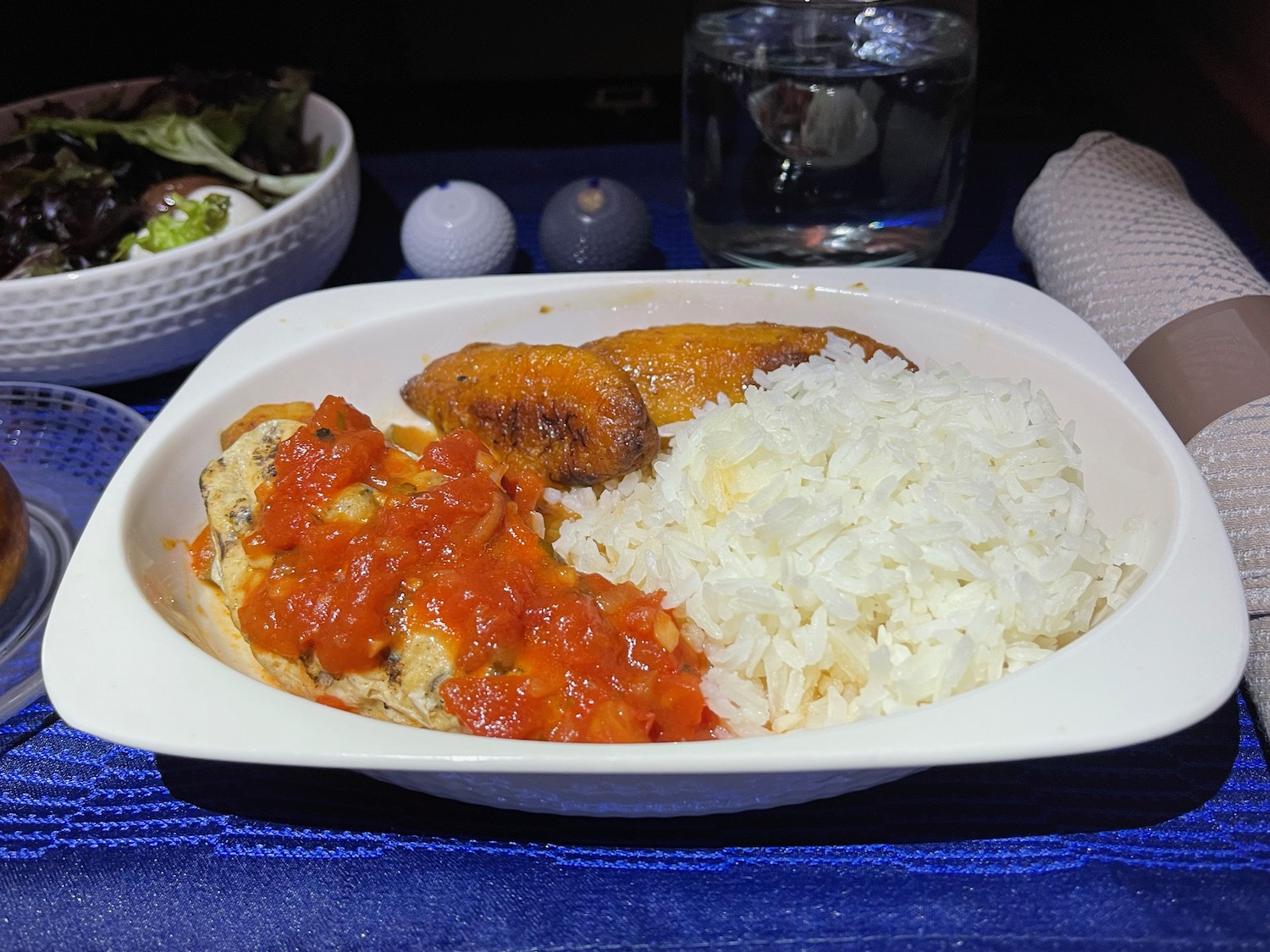 While it’s great to see real glasses back onboard, I hope United will bring back its pre-pandemic service that includes multi-course servings with an appetizer, bread basket, cheese course, and ice cream sundae service. It’s time to do that, especially as United talks about becoming the best airline in the world. The all-in-one tray can still be an option for those who prefer it, but I enjoy a more leisurely meal service.

I had worked a long day and the main point of this flight was simply to sleep, and sleep I did. I just love longhaul flights because you have plenty of time to sleep…even a West Coast to Europe flight does not allow quite enough time to enjoy a long rest sandwiched between two meals. But with 11 hours and 22 minutes remaining, I fell asleep and did not wake up until less than 90 minutes prior to landing. Well rested, I awoke as we were flying over Namibia. A flight attendant noticed I was awake and offered me a choice for breakfast between:

I chose the egg kale dish, which is one of my favorite breakfasts on United. It was served with hot coffee, a warm croissant, fruit, and yogurt. 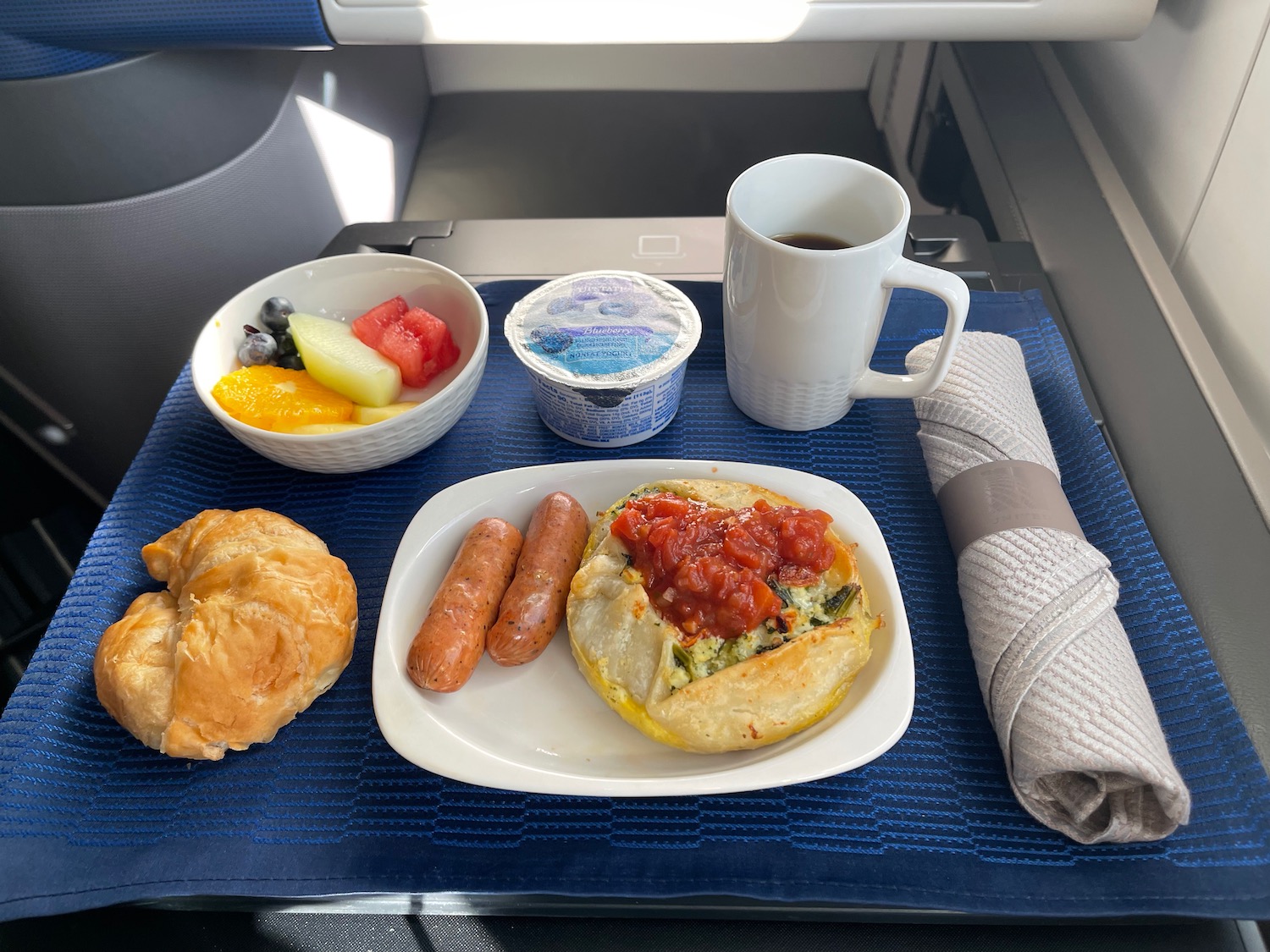 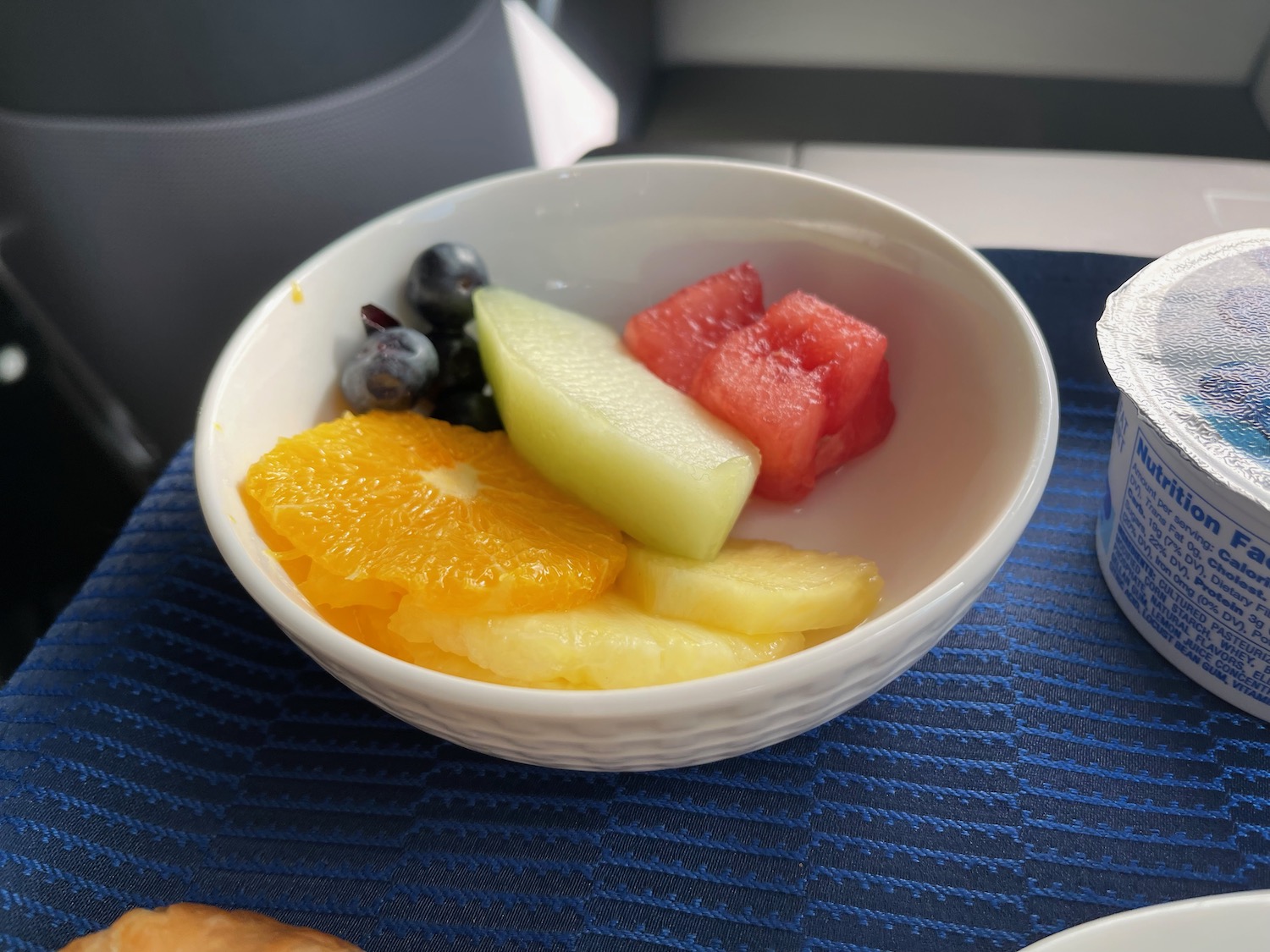 As we neared JNB, I looked out the window and marveled at how the world had changed since I was last in South Africa in March 2020. We passed by a trio of former South African Airways A340s that had been painted white (not sure why…) and also passed a beautiful Lufthansa 747-8 and SWISS A340. As a fun comparison, you can compare this review to my Newark – Cape Town review from March 2020, which I flew just a week before the pandemic shut down the world.

Other than the missing appetizers and more elaborate dessert choices, not much has changed.

Finally, I did not connect to wi-fi during the flight, but a flight pass with unlimited data was $22.99. That’s not bad for such a longhaul flight.

I slept like a baby for the majority of the flight: United gets the basics rights. The bedding is great and the food was edible. The Polaris seat is quite comfortable, especially if you choose a bulkhead. Service was friendly. IFE choices were wide and wi-fi internet were available. If United would just restore its soft product to pre-pandemic levels (or even exceed it), it would truly be a world class product.