There are many reasons why people hate car rental companies, but perhaps most paramount is due to hidden fees and unexpected charges that renters often find in their final invoice. I’ve been victim to that as have countless other consumers. A recent incident merits further examination.

Recall that earlier in the week I analyzed a column by consumer-advocate Christopher Elliott concerning a $932.96 charge from Thrifty Car Rental on a one-way rental from California to Minnesota. Elliott argued the fee was because the customer, Matthew Oyen, returned to the car to Terminal 1 instead of Terminal 2 at Minneapolis-St. Paul Airport (MSP).

I pointed out that the $932.96 fee (to the penny) is what Thrifty charges as a one-way drop fee (calculated at $0.49/mile) to return a car rented in Orange County Airport (SNA) to MSP.

I’ve been in contact with Elliott’s team and want to share some more details about the incident. His receipt from Thrifty, upon renting the car, also indicated no drop fee, though a (slightly) different estimated final price (about $33 cheaper): 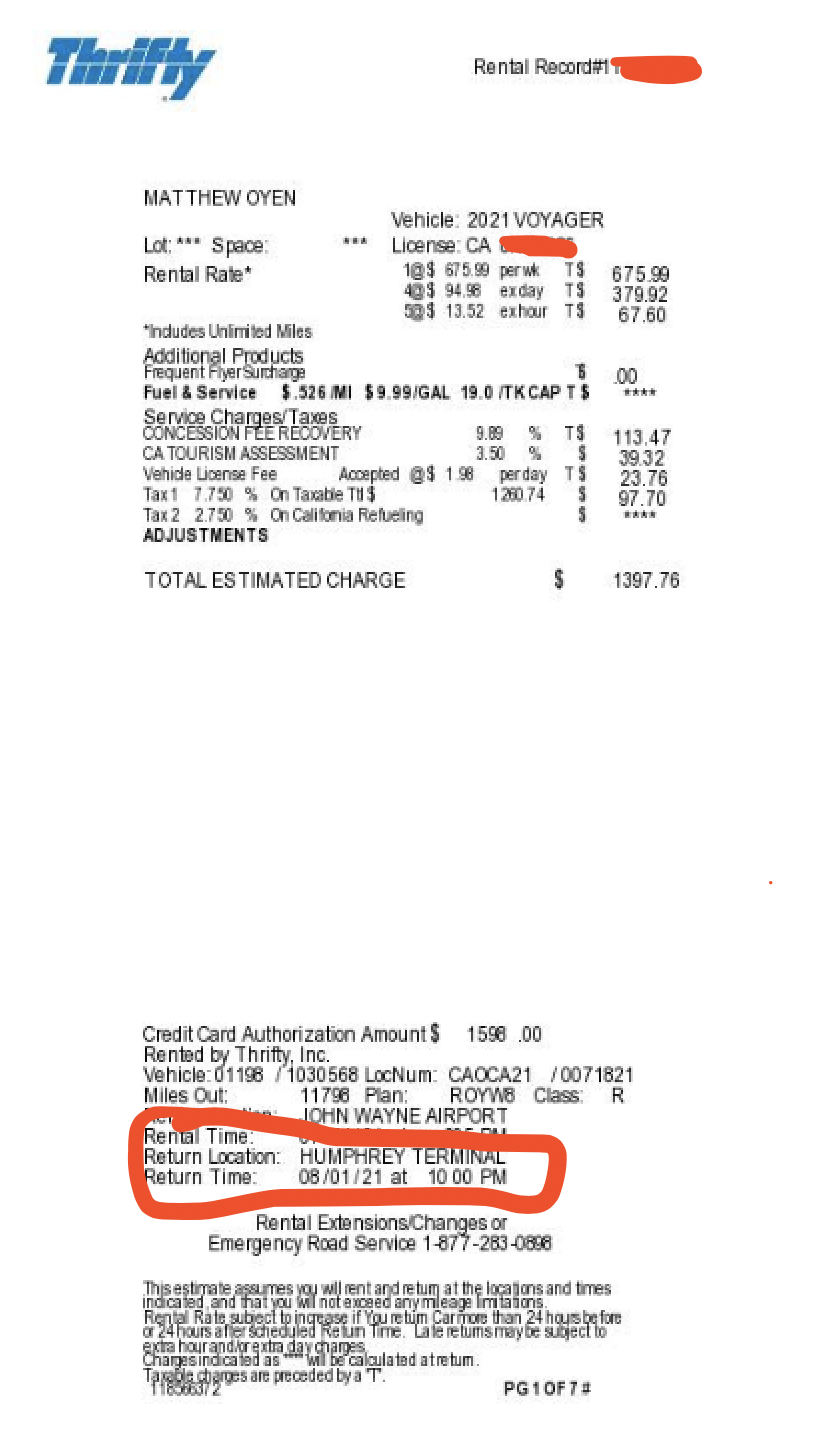 Do note that his rental receipt from Thrifty indicated a return to “Humphrey Terminal” which is Terminal 2. I suspect that showed up on the reservation because that is where Southwest flies at MSP.

Oyen returned the car to Terminal 1 instead. His final invoice included an extra service charge: Elliott and his team concluded this triggered the slight variance in rental cost as well as the $932.96 “service” charge. Indeed, that is precisely what Oyen was told when he contacted Thrifty to question the service charge.

I still don’t believe that is the case. Notice on the final invoice that the location number is listed as 076013. I called Thrifty and asked what location that was. I was told MSP Airport. Per, Thrifty, there is no difference between Terminal 1 and Terminal 2 in their system; it is the same code and it does not matter where the car is returned at the airport. I called again and was given the same answer.

Thus, I still believe the fee was a hidden charge for the one-way car rental and had nothing to do with dropping off the car at Terminal 1 instead of Terminal 2.

But there was no foul play here on the part of the consumer. Indeed, his request for a refund was 100% reasonable and justified considering his initial reservation indicated a $0 drop fee.

Even though Thrifty is a preferred Rapids Rewards partner, Thrifty no longer appears when searching for a one-way rental from SNA to MSP via Southwest Airlines. Could it be that one-way drop fees were not properly displaying and thus Thrifty is no longer offered as an option?

I’ve spent an immense amount of time on this over the last couple days. So has Elliott’s team. And while we may disagree on why the $932.96 was added, it seems clear to me that the consumer, Mr. Oyen, should not be held responsible for a fee he did not agree to.

And is it not maddening that three receipts show three different amounts when Oyen never deviated from the plan (in terms of pick-up, drop-off, and length of rental)? While airline fees are so heavily regulated, it seems absurd to me that it is still very much the Wild West when it comes to car rental fees.

In the end, Oyen rightfully received his refund.

I now believe Elliott and his team made a good faith effort to examine this issue. While I think the sensational headlines about being charged $932 for returning the car to the wrong terminal a the same airport were misplaced, I am grateful to his team for helping Oyen get his money back from Thrifty.

This whole case is a reminder of why people hate rental car companies and also why you must watch your bill like a hawk, especially if you book via a third party site like an airline or online travel agency. You may also wish to sign off on the final amount when dropping off your car rather than just waiting for the invoice to come via email.

The moral of the story is that hidden fees and rental car companies go hand-in-hand. As deplorable as that is, you can better protect yourself by being prepared to scrutinize every invoice you receive, preferably before your credit card is charged.